Monday’s Parliament sitting opened with the House of Representatives paying tribute to the late Oliver Friggieri, the writer and academic who died on Saturday. 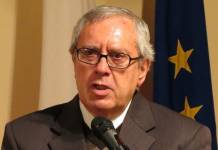 Speaker Anġlu Farrugia said that it was fitting to suspend the house’s agenda to honour Friggieri, who he described as a towering figure in Maltese society – not just in the fields of language and literature. He declared himself lucky to have known him personally.

Government whip Glenn Bedingfield then said that he had little to add to what Farrugia and Cutajar had said, but said that in light of Friggieri’s legacy, it was only fitting for the government to hold a state funeral.