The ‘amber list’ of places from which travellers are required to test for Covid-19 has been expanded with the addition of France’s two largest cities, the Health Ministry announced on Thursday.

The list now comprises three countries – Czechia, Romania and Tunisia – the two French cities and the Spanish cities of Madrid, Barcelona and Girona. So far only one country – Bulgaria – has been taken off the list introduced last month.

As in previous weeks, the revised list of countries comes into effect on midnight.

According to the latest figures published by the European Centre for Disease Prevention and Control (ECDC), Malta presently reports the sixth -highest prevalence of Covid-19 among 31 European countries (the EU, the EEA and the UK), with 79.8 new Covid-19 cases per 100,000 people reported over the previous 14 days.

Despite their exclusion from the list, Luxembourg (140.7) and Croatia (92.1) are also reporting a higher prevalence of Covid-19 than Malta.

Earlier this month, the European Commission proposed that member states should base their travel restrictions on common criteria. It also suggested that requiring testing should be preferred over the imposition of quarantine, which is in turn deemed preferable to refusing entry outright. 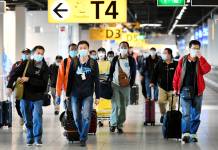 Amy Borg   September 15, 2020
Earlier this afternoon the Malta Red Cross Water Rescue Team, together with a CPD representative, assisted Nature Trust in the retrieval of a dolphin that was washed onto the rocks.