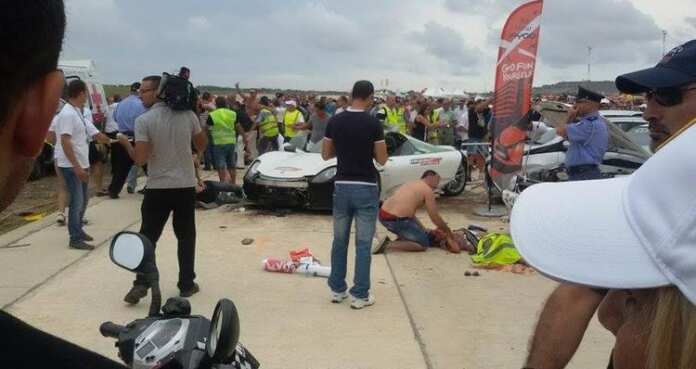 A Court Expert told the magistrate that in Paqpaqli’s case, Paul Bailey’s Porsche did not touch the grass before losing control and crashing into the spectators.

Bailey and the 13 member committee organising Paqpaqli għall-Istrina2015 are being charged of involuntarily grievously injuring  others, causing damage to other vehicles through imprudence and carelessness, and not adhering to the regulations.

In court, it was explained that when Bailey walked out of his Porche after the accident, surveyed the desperation around him and excused himself.

The expert appointed by the court, Martin Bajada explained that he appointed various experts on the case. A team of German experts from Porsche were appointed by the magistrate to assist court in tests carried out on the vehicle, which automatically switched to crash mode, and had to restart.

Court Expert Quentin Tanti said that the car did not clip the grass before it lost control, although it was on the very edge of the tarmac and grass.

In July it was said that Bailey switched off the controls before the car crashed into the crowd. Witnesses testified for Bailey’s professional driving.

The compilation will continue in October.

Monique Agius   March 26, 2020
BOV explained that the first tranche of €10 million has already been allocated to assist businesses, mainly micro and small business SMEs, in their working capital requirements. The bank has committed itself to introduce further measures in the coming days to ensure that liquidity continues to flow in the market.

Charmaine Attard   March 26, 2020
Bank of Valletta is introducing other measures aimed at assisting and supporting personal customers during these unprecedented times due to COVID-19.

Government should ensure that all those working in journalism will be...