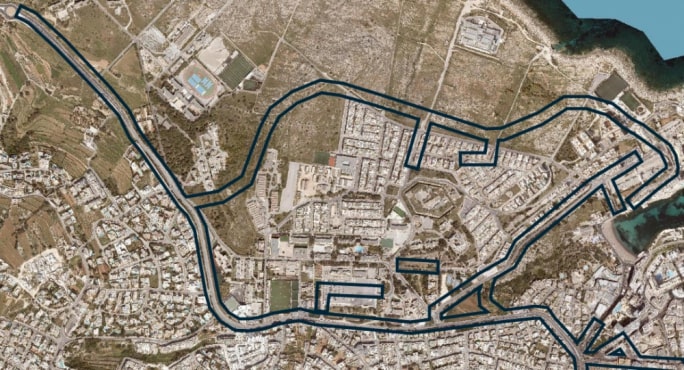 Infrastructure Malta’s road and tunnel plans for the Pembroke and Paceville region have been published on the Planning Authority’s (PA) website for public consultation.

Infrastructure Malta had announced the project on its social media page in May but the actual plans were not made public. The Ombudsman had insisted that the public should be informed about the plans from the initial stages.

In Paceville, the proposed tunnels will converge under the protected Spinola Gardens.

‘An Environmental Impact Assessment should be issued’

In its preliminary assessment, the Superintendence for Cultural Heritage has noted that the project will have a potential impact on a number of heritage sites, including the gardens around the Spinola Palace, the Ħarq Ħammien underground cave, the scheduled rifle ranges and military parade ground ranges at Pembroke, and the monuments located in the Spinola junction.

The Superintendence, therefore, stated that a project of such scope and extent should require an Environmental Impact Assessment, which must include an assessment of the cultural heritage features within the scope of the project.

“They are accommodating the mega projects, not residents”

Independent candidate Arnold Cassola had lodged a complaint with the Ombudsman, requesting that office to investigate why the development plans were withheld.

In a statement, Cassola insisted that all these works are being done to accommodate the mega projects such as the DB Group and Corinthia.

Cassola asked, “how is all this going to affect our asthma, our right to decent noise levels?”

He added that there are thousands of residents involved who, until today, have been kept in the dark by Infrastructure Malta.

The bulldozing tactics by Infrastructure Malta must no longer continue, concluded Cassola.

Amy Borg   August 13, 2020
The statement signed by Archbishop Charles Scicluna states that marriages will only take place during that week in exceptional situations imposed by the COVID-19 pandemic.

Airport tragedy avoided by a split second in Lisbon

James Xuereb   August 14, 2020
Investigators found that based on the speed it was travelling, in another 1.3 seconds the aircraft would have reached the end of the runway, which could have led to a disastrous end.