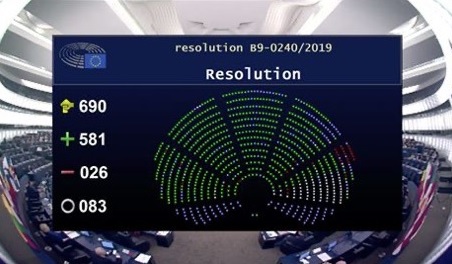 Five hundred and eighty-one MEP on Wednesday voted for a resolution calling for the immediate departure from office of Prime Minister Joseph Muscat. This means that out of the 690 members, five out of six voted for him to leave immediately and 83 abstained. Only 26 voted against the motion, that is actively supported Muscat. This means that a considerable chunk of the 154 S&D (socialist) MEPS, voted for the immediate departure of Muscat. The only 4 members of the S&D to vote against the resolution were the 4 Maltese PL MEPs. One of the few who voted for Muscat was the anti-EU MEP Nigel Farage.

On Tuesday, in a two-hour debate on the motion in the hemicycle, the vast majority of the speeches made by MEPs including Maltese EPP MEPs, called for an immediate departure of Muscat. MEPs described Malta as being morally bankrupt and a haven for racketeers.

“How can we afford a government in moral ruin?” EP discusses Malta