Over 10,000 foreign nationals have be repatriated in the wake of the Covid-19 pandemic, Foreign Affairs Minister Evarist Bartolo revealed.

In reply to a parliamentary question by PN MP Carm Mifsud Bonnici, Bartolo confirmed that 10,278 had sought assistance by the end of May.

When asked to elaborate on their nationalities, Bartolo revealed that they were repatriated to a staggering 108 countries, covering all the Earth’s continents save for Antarctica. Mifsud Bonnici also asked for the numbers to be broken down by sex, but no such breakdown was provided.

The government had launched the voluntary repatriation scheme in the midst of the Covid-19 pandemic, citing humanitarian concerns. It offered heavily-subsidised flights for foreign nationals seeking to return to their country of origin, with applicants only needing to pay a nominal fee. 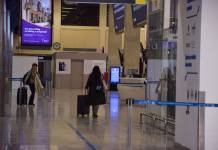