In a statement issued by the European People’s Party, the largest grouping in the European Parliament expressed its outrage that “we have a sitting Prime Minister in an EU member state refusing to immediately resign following the implication of his chief of staff with the assassination of Daphne Caruana Galizia.” The EPP went so far as to accuse the Prime minister of planning his succession “shows that the socialist Prime Minister and his government have no respect for the Maltese, the rule of law or any EU values that they signed up to when the country joined the EU”. 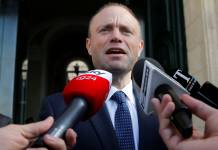 The EPP said that in a democracy, when the highest officials in the immediate circles of the Prime Minister have been interrogated in relation to the assassination of a journalist, “it is an obligation and moral responsibility towards the integrity of the country’s institutions and the citizens to leave office as soon as possible and allow for justice to be served”.

The EPP joined the Partit Nazzjonalista (PN) in Malta in calling for the Prime Minister and his government to honour his commitment to the country and its citizens by stepping down. EPP sad that it also stands with all the Maltese who took to the streets demanding independent justice, free speech and a country free of corruption. “The gravity of this situation goes far beyond party affiliations, it is about safeguarding the freedom of speech and uncovering the truth behind the hideous murder of Daphne Caruana Galizia” concluded the EPP statement.