Prime Minister Robert Abela is expected to finalise his cabinet on Wednesday.

The cabinet changes known so far, though not officially confirmed indicate major changes from the previous formation which was led by Joseph Muscat.

The Labour Party’s Deputy Leader Chris Fearne should retain his position as Deputy Prime Minister and Minsiter of Health. Byron Camilleri is expected to be appointed Minister of Home Affairs while Edward Zammit Lewis is going to be entrusted with the portfolio of Justice.

Minister Herrera is expected to be entrusted with Local Government and Culture. It is understood that Edward Scicluna will retain the Finance Portfolio.

According to sources who spoke with Newsbook.com.mt Owen Bonnici will be assigned the Education portfolio while Evarist Bartolo will be given the Foreign Affairs Portfolio. A new portfolio will be assigned to Aaron Farrugia who will be in charge of the Planning Authority, Environment and Climate Change. Under Muscat, Farrugia was Parliamentary Secretary responsible for European Affairs. Justyne Caruana is expected to retain her role as Minister for Gozo.

Silvio Schembri will be entrusted with the Economy apart from the aspects he held when he was Junior Minsiter. He is also expected to take charge of Air Malta. Other reports indicate that Clayton Bartolo is expected to take charge of the portfolio held by Schembri as Junior Minister. Schembri’s portfolio will also include the trade promotion aspect which previously was part of the Foreign Affairs Portfolio.

Ian Borg’s portfolio is expected to include Projects Malta apart from Transport and the Ports. The Planning aspect, as previously mentioned, has been transferred to Aaron Farrugia.

Dr Michael Farrugia is expected to be responsible for Energy. Roderick Galdes will be entrusted with the Ministry for Housing.

Michael Falzon is expected to retain a portfolio linked to social policy. It is understood that Silvio Parnis will be responsible for disability.

Clifton Grima is expected to retain his role and portfolio.

Julia Farrugia is expected to be appointed Tourism Ministry. The Air Malta element will be moved from her portfolio to the Ministry of the Economy.

Rosianne Cutajar is expected to be in charge of Equality and Reforms.

Various reports indicate that the other Deputy Leader of the Labour Party Chris Cardona will not form part of Abela’s cabinet, as he did not accept the offer to head the Ministry of Tourism after PM Abela has indicated to Cardona that he won’t be responsible for the Economy, a role he held under Muscat.

Besides Cardona, the reshuffle might mean the end of ministerial or junior minister roles for Joe Mizzi, Chris Agius and Anthony Agius Decelis although other reports indicate that Agius will be parliamentary secretary responsible for lands and construction. 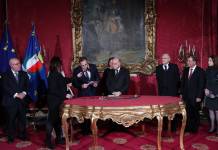