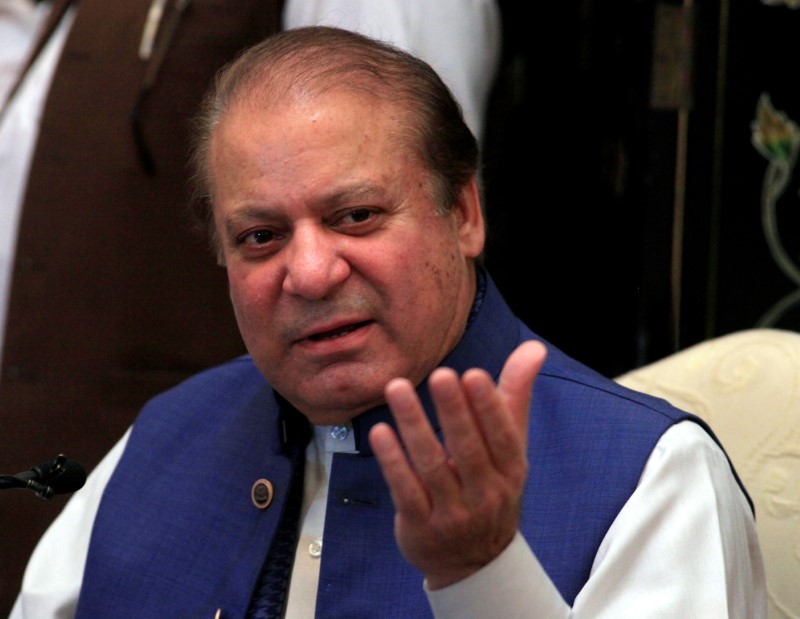 A Pakistani court on Friday sentenced ousted Prime Minister Nawaz Sharif to 10 years in prison for corrupt practices linked to his family’s purchase of upscale London flats, in a major blow to his party ahead of general elections on July 25.

The guilty verdict in absentia against Sharif, 68, threatens to end the career of one of Pakistan’s most high-profile politicians of the last four decades, a political survivor who was prime minister three times.

A political ally said Sharif would return to Pakistan from London to file an appeal, facing arrest on arrival just before the election, in which his party is in a close race with opposition figure Imran Khan’s party.

Sharif’s daughter, Maryam, widely seen as his chosen political heir, was sentenced to seven years in prison. Maryam’s husband and PML-N lawmaker Muhammad Safdar was handed a year in jail, he said.

The conviction means Maryam Sharif will be disqualified from contesting the elections.

“The people of Pakistan and PML-N reject this decision,” said Sharif’s brother Shehbaz, who took over as PML-N president after his brother was banned from holding office for life, and is expected to be its prime ministerial candidate.

“This decision is based on injustice.”

Sharif and his daughter were in London on Friday with Sharif’s wife, Kulsoom, who is being treated for cancer and is in a coma after suffering a heart attack last month.

Both denied wrongdoing and will appeal the decision, said Sharif ally Tariq Fazal Chaudhry, adding that the former premier would return to Pakistan before the election.

The NAB court ordered Sharif to pay a fine of 8 million pounds ($10.6 million) and fined Maryam 2 million pounds, while ordering the confiscation of the London properties on behalf of the Pakistani government, Abbasi said.

If Sharif returns he will be arrested on arrival under the law, though he could later be freed by a separate court pending appeal, Abbasi added.

The National Accountability Bureau (NAB) court accused Sharif and his family of money laundering and being unable to legitimately show the money trail for the purchase of several luxurious properties in London, mostly in the mid-1990s.

A copy of the verdict said the Sharif family had failed to prove a legal source of income for the purchase of Avenfield apartments in 1993, 1995 and 1996.

Sharif was ousted by the Supreme Court in July 2017 and barred from politics for being “dishonest” by failing to report a monthly income of 10,000 Emirati dirhams ($2,723) from a company owned by his son. He denies drawing the monthly salary.

But he has kept de facto control of the Pakistan Muslim League-Nawaz (PML-N) party that he founded.

The decision comes at a time of growing suspicion of military meddling in politics ahead of the polls, as well as media complaints of being muzzled.

Sharif had denounced the court proceedings against him as politically motivated and a judicial witch-hunt, often suggesting the military was to blame.

“Justice has been massacred,” Maryam’s husband Safdar said after the verdict.

Pakistan’s military, which has ruled the nuclear-armed country for almost half its history, denies involvement in civilian politics. But the military ended Sharif’s second stint in power in 1999 in a bloodless coup.

Sharif has a history of conflict with the military even though his political career was initially nurtured by military dictator Zia ul-Haq in the 1980s.

He fell out with powerful generals once he ascended to power a decade later, and relations became fraught after his return as premier in 2013, partly because he challenged the military over foreign policy, which the generals traditionally considered their domain.

Sharif has argued that the military, in cahoots with top judges, has used cases against him and party members to tip the scales in favour of cricketer-turned-politician Imran Khan ahead of the election.

Khan is running on a socially conservative, anti-corruption platform. He denies colluding with the military and praises the disqualifications and prosecutions of PML-N figures as a long-needed crackdown on graft.

Khan was a driving force behind Sharif’s downfall, seizing on the 2016 Panama Papers’ revelations that the then-prime minister’s family had bought the London apartments using offshore companies.

“I thank God that for the first time in history a powerful (person) has been sentenced by the justice system in Pakistan,” Khan told a rally after the verdict. “Now big plunderers will not come to power, but will go to jail.”