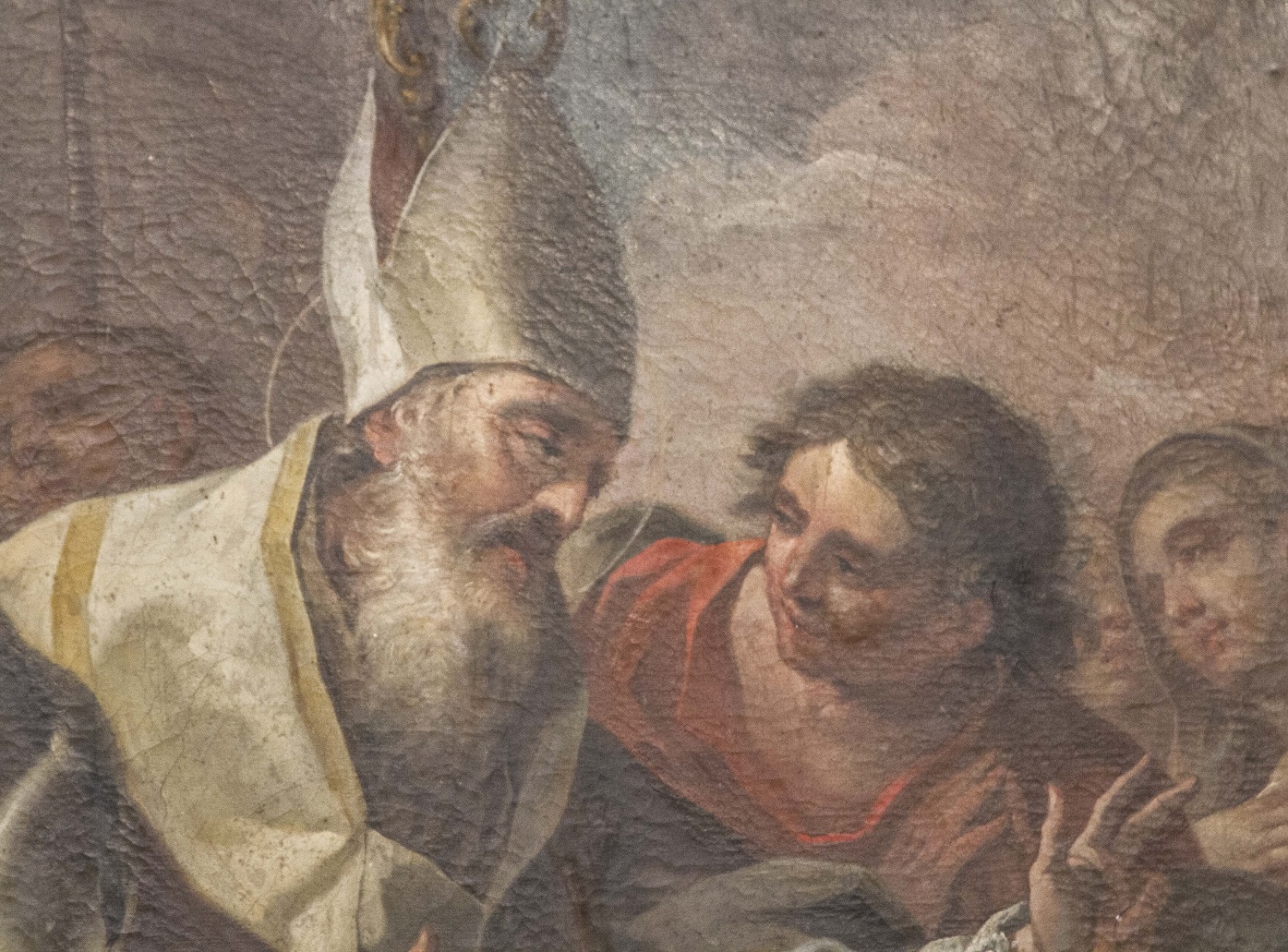 An open day will be held on the 12th January 2019 between 9.00 am and 12.00 pm and 3.30 pm to 5.00pm where the general public is invited to attend to view the conservation work of ‘St Helena Finding the Cross’ in progress and to experience the conservators working on the painting.

The project was entrusted by the Collegiate Chapter of the Basilica of Birkirkara to Atelier del Restauro Ltd and is being led by conservators Maria Grazia Zenzani and Valentina Lupo, who are honoured to have been entrusted with the restoration of this significant painting; the largest canvas painted by Maltese artist Francesco Zahra.

The painting was taken down in October 2018 and after a thorough photographic and graphic documentation and cleaning tests, the cleaning intervention commenced. This included removal of the oxidized varnish layer, over-paintings and accumulations of candle sooth including wax droppings.

To date, half of the painting has been cleaned. The consolidation of the canvas and paint layer will be including other treatments to the support of the canvas.

Thanks to a meticulous cleaning treatment, the altered varnish layer and the embedded superficial dust, together with over-painting present is being removed and the bright colours and evocative light of the pictorial layer is visible once again. Where losses of the paint layer will be revealed, pictorial re-integration will be carried out.

The project includes also the conservation of the original strainer frame which will be modified according to modern conservation practices in order to support better the painting. The fine gilded decorative sculpture around the recess of the painting will also be conserved.

History of the painting

The altar canvas painting of ‘St Helena Finding the Cross’ was painted by Francesco Zahra in 1763 (this is the date depicted by the artist on the bottom far right side of the painting).

The canvas measures 370cm x 550cm. The painting was completed at a time when Zahra was regarded as being the most significant painter in Malta. For this painting, Zahra felt inspired by the famous marble statue of St Helen by Andrea Bolgi, executed for the crossing of Saint Peter in Rome. Both depictions of the saint demonstrate similar poses, physical structure and draping of her robes.

The iconic image of the Saint is illustrated gracefully in Zahra’s masterpiece, where both the saint and the cross occupy the majority of the space of the painting. It is thought that Salvatore Psaila was inspired by Zahra’s painting to sculpt in 1837 the marvellous wooden polychrome titular statue of St Helena.

The scene depicted in the painting tells the story of St Helen, the mother of Emperor Constantine, as she goes on a pilgrimage to the Holy Land. While on her travels, she discovers the True Cross. Visible in the painting as one of her followers is Bishop Macarius, who can be seen in front of a large building which likely refers to the church of the Holy Sepulchre. This was a building, which was constructed on the site on the request of the Saint. Its remains can be seen at the feet of the Saint, shown as debris and a broken statue.

Watch: ‘We help each other grow and improve our art’