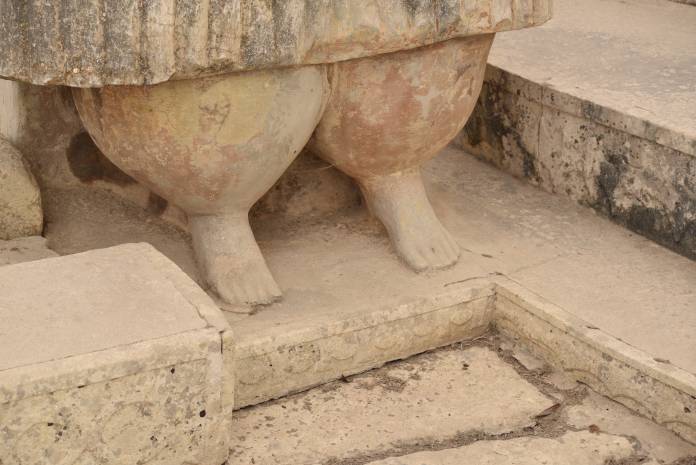 On Sunday, 20th October, Heritage Malta is opening the megalithic temples of Tarxien to the public free of charge. These ancient temples which were built between 3600BC and 2500BC are inscribed in the UNESCO World Heritage List as outstanding examples of architecture that illustrate a significant stage in human history. Besides joining the intriguing guided tours, visitors will also have the opportunity to purchase a new guide book which will be launched on the same day.

The Tarxien Temples were discovered in 1913 when a local farmer began hitting large stone blocks when ploughing his fields deeper than usual. The area was extensively excavated and a complex megalithic site was revealed. Sections of the structure were highly decorated with spirals and reliefs of animals. A giant stone bowl, part of a huge statue and a number of interesting stone features added to the mystique of the site.

Visitors can learn more about these megalithic structures during guided tours which will be held in English at 9.30 am and in Maltese at 2.00 pm. Each tour is estimated to take about an hour. Places will be available on a first come, first served basis.

Visitors can also observe a session of pottery washing to understand how archaeologists use pottery to learn more about the past. Visitors can also ask questions during the session organized by the Classics and Archaeology Student Association, to be held between 10.00 an and 1.00 pm.

A new guide book for the Tarxien Temples will be launched on the day. The guide book is an essential tool for those visitors who would like to know more about the Tarxien Temples during their visit, also allowing them to relive their memories of the site each time they leaf through the publication’s colourful photos and accompanying text. The author will be signing copies on  the day.

100 years from the end of excavations at the Tarxien Temples

Torchlight tour at the Tarxien Temples

Coryse Borg   August 11, 2020
Preparations for the first edition of Malta’s Got Talent programme, which will be broadcast on TVM from October, continue with the announcement of the jury members and the presenter.

“History suggests cinema will adapt and bounce back” – Carinzia Camilleri,...