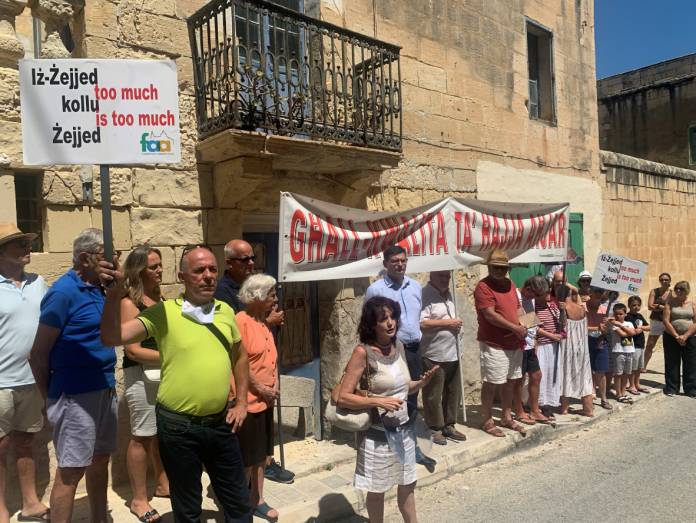 A development project in St Julian’s which will involve the development of both residential apartments as well as commercial space between the narrow streets of St. Elias Street and B’Kara Hill has come under fire as it would involve the demolition of what is thought to be the oldest surviving house.

Activists and St Julian’s mayor Albert Buttigieg addressed a press conference on Saturday to express their concern regarding the development project.

The project involves the development of 57 apartments, several shops and office space.

said that this project, proposed by TUM Invest, would involve the development of 62 apartments, garages and commercial space between the narrow streets of St. Elias Street and B’Kara Hill.”

Flimkien ghal Ambjent Ahjar coordinator Astrid Vella said that this was another case which would result in the over-development of this urban conservation area. She argued that the area should be considered under the master plan for the area since it falls under St Julian’s local plan. She maintained that the application could not be considered on its own.

Vella said that the application had been processed without the necessary geological studies. She explained that the area is already extremely busy and cannot even cope with the traffic flow.

St Julian’s mayor Albert Buttigieg condemned the commercialization of the locality noting that it has become constantly under attack by developers.

“Developers have not only taken our sidewalks and limited parking spaces but have now also taken our sea as well in order to simply satisfy their greed and selfishness,” Buttigieg said.

The Planning Authority Board is expected to decide on the development on 22 July at 9.30am.

He remarked that with all these developments, St Julian’s is becoming a “depressed luxurious area.”

The PA Board is expected to decide on the development on 22 July.