The broadcasting marathon Oħloq Tbissima launched today at 5pm for the 18th consecutive year. CPi Media are hosting it at the studios located at at Dar San Gużepp, Santa Venera up till 19th July.

This year’s motto is “Give dignity, feed a family”. The social media hashtag is #ItmaFamilja.

Videos recorded and sent to CPi Media by MSSP missionaries in Peru, Pakistan and the Philippines will be shown during the broadcast. These missionaries will explain how the pandemic hit the locals and how thousands of families lost their jobs and had no money left to buy food – not even for one meal a day. 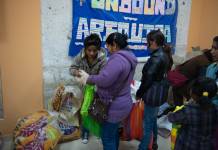 This year the studio is set up with two large screens. Like last year, one of the screens will be used to visualize a board with symbols where they intersect. Each symbol on the board represents a family in Peru, Pakistan or the Philippines.

Those who donate €200 or more will be given a photo of these families to keep as a souvenir, with an inscription that says “I have fed a family”.

One can donate by calling the following numbers:

You can also send an SMS:

The pledge line is the following:

The marathon is being broadcast LIVE in its entirety on F Living and for many times on ONE, NET TV and TVM2 stations. The marathon will also be broadcast via LIVE Streaming on the Oħloq Tbissima Facebook page.