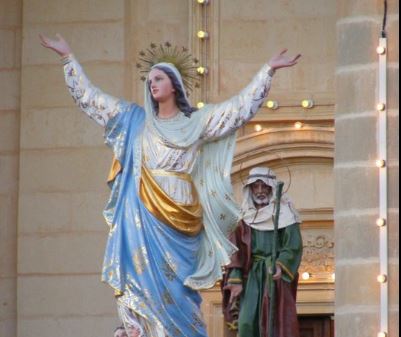 €17,000 were offered by Wistin Vella for the privilege of carrying the Santa Marija statue in Mġarr during the traditional auction.

This year saw two rival groups trying to acquire the right to carry the titular statue. Wistin Vella offered €3,000 more to be able to carry the statue again this year. Last year he managed to secure the right for his team for the sum of €14,000.

A quarter of the sum will be donated to the Bible Society.

The auction attracts a large number of persons on the parvis of the Mġarr Parish Church on the day of the feast which takes place every Sunday after the15th of August, and starts at noon.

The tradirin started in 1922 right after the Santa Marija statue had arrived from Marseilles, as dues were still to be paid on the statue.

Watch: Now you can own a piece of history from the British Monarch’s Malta home

Reuters   July 4, 2020
"We have decided to confine Segria due to data that confirm too significant a growth in the number of COVID-19 infections," Catalan regional president Quim Torra told a news briefing.

Choice of President and Chief Justice will remain in hands of...