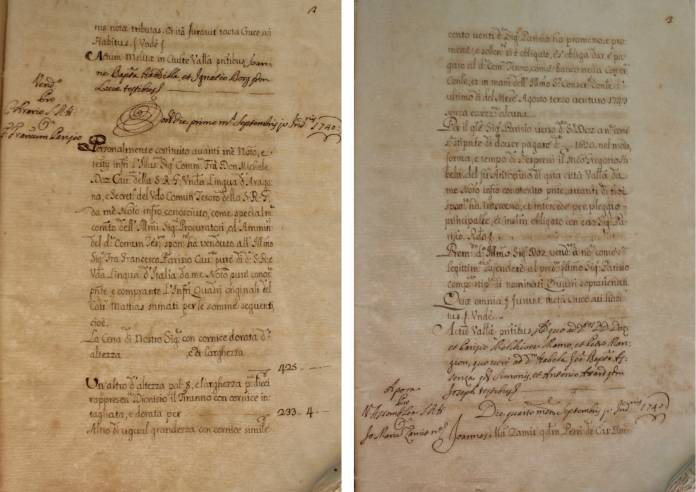 A deed discovered at the Notarial Archives in Valletta has shed light on the provenance of Mattia Preti’s Boethius and Philosophy, acquired earlier this year by Heritage Malta for the sum of €1,323,000 through the National Development Social Fund.

The deed was drawn up on the 1st September 1740 by Valletta Notary Giuseppe Callus. It documents the Common Treasury of the Order of St John selling Preti’s painting, titled Filosofia, together with three other works by the same artist, to the Italian Knight Francesco Parisio. The painting sold for 233 scudi and 4 tareni.

This discovery was made by Dr Christina Cassar Meli who is carrying out historical research on the provenances of artistic work at the Notarial Archives in St Christopher Street. This research project is the result of an unprecedented collaboration between the Notarial Archives and the University of Malta, which is producing a fascinating wealth of data.

Professor Keith Sciberras, who is supervising Dr Cassar Meli’s doctoral research in the Department of Art and Art History, emphasised how this new document sheds major light on the provenance of the painting and proposes another significant link in its later passage from the collection of Fra Andrea di Giovanni into that of the Grand Master’s Palace. The reference to a painting of Filosofia of approximately the same size in this inventory documents the work passing into the collection of Fra Francesco Parisio in 1740 and identifies the corpus of other pictures that were displayed next to it.

Dr Joan Abela, Consultant Historian at the Notarial Archives, explained that the collaboration is just one of six research projects being sponsored by the Office of the Chief Notary in collaboration with the University of Malta. These research initiatives form part of a holistic plan which seeks to develop the newly rehabilitated Notarial Archives into a centre of excellence in conservation and research. Dr Abela further stated that it is only through such injection of funds by the Government that Malta’s hidden history may be discovered, studied and made available to the Maltese nation.

Heritage Malta’s Senior Curator Kenneth Cassar remarked that Mattia Preti’s oil painting representing Boethius and Philosophy is a most pleasant addition to the national collection and an important homecoming, for it has all the necessary artistic and art historical traits to be considered a masterpiece: an undisputable distinguishable hand, technical dexterity, a sophisticated narrative, a relatively clear provenance and, ultimately, a remarkable size. Imbued with the drama and tenebrism of the artist’s late works, it is a fine example among the relatively few Preti philosophical subjects in Malta.

Cassar added that before returning to the Grand Master’s Palace, the masterpiece will undergo restoration and until then research will help us understand further its value and history. In appreciating this national treasure, it is indeed with special pleasure that the research collaboration of three public entities is welcomed.