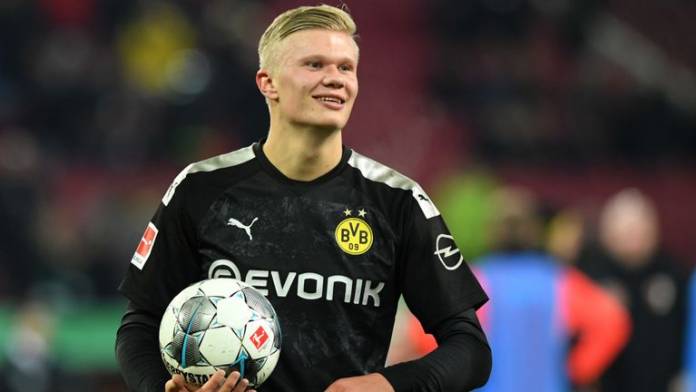 The Bundesliga resumed with a flourish after the one-month winter break. League leaders Leipzig had to come from behind against visitors Union Berlin who had taken the lead through Marius Buelter. Leipzig came to life after the break three goals from Timo Werner who scored the equalizer on 51 minutes. Marcel Sabitzer made it two for the hosts six minutes later and Werner scored his second and Leipzig’s third seven minutes from the end. Fourth-placed Borussia Dortmund travelled to Augsburg in a game which produced eight goals. Augsburg had led 3 – 1 until the 59th minute of the game. Niederlechner scoring two while Richter scored the third for the hosts. Brandt had temporarily cut the deficit for Dortmund. Enter the Norwegian Erling Haaland, the 19-year-old talent who joined Dortmund a few weeks ago from Salzburg for the sum of 20 million euro. The teenager scored his first goal three minutes after coming on. Jadon Sancho drew the hosts level in the 61st minute. Haaland scored his second and Dortmund’s fourth in the 70th minute and then went on to score an unforgettable hat-trick nine minutes later. Second-placed Bayern Munich travelled to Hertha Berlin on Sunday in their attempt to keep up with the leaders. Hertha under the guidance of Jurgen Klinsmann had a four-match unbeaten run to defend. The visitors couldn’t find a way through the hosts organized defence until on the hour mark Muller volleyed in to break the deadlock. Lewandowski doubled the lead from the penalty spot fifteen minutes later. Thiago and Perisic who is on loan from Inter scored the fourth for the defending champions.

The Premier League race seems to have only one contender as Liverpool extend their lead to sixteen points with sixteen games to play. All the four teams chasing them dropped points while they keep marching on from one victory to another. Third-placed Leicester City suffered a fourth loss in last six games, double the amount they suffered in their opening 17 games this season. A brilliant individual goal from Barnes gave the Foxes the lead on 33 minutes. Burnley started positively in the second half and Chris Wood found the net for the hosts ten minutes after the break. Jamie Vardy had the chance to put Leicester in the lead again, but his penalty kick was well saved by goalkeeper Pope. The mood inside Turf moor changed and the crowd urged the home team forward. Their efforts were rewarded when Ashley Westwood thundered home the winning goal with 11 minutes to go. Defending champions Manchester City faint hopes of retaining the title were dealt another blow as they were held to a draw at the Etihad Stadium. A brilliantly organized Crystal Palace side silenced the already subdued home fans when they took a shock lead through Tosun from a corner. Palace hung on until the last ten minutes when two Sergio Aguero goals seemed to have earned the home side three points. There was another twist in the plot when Fernandinho turned a dangerous delivery from Zaha into his own net. The game of the weekend was the encounter between Liverpool and Manchester United, Solskjaer’s side was the only teams to stop Liverpool from winning with a draw at Old Trafford. Liverpool was the superior side and took the lead through a Virgil van Dijk header after fourteen minutes. The lead could have been bigger but United hung on and produced a late assault on Liverpool’s defence late on in the game. There was rare anxiety around Anfield in the closing minutes before Salah scored Liverpool’s second in the 93minute which started wild celebrations on and off the field. Manchester United are now 30 points behind the leaders.

Inter were held to a 1 -1 draw by Lecce as they dropped points for the second week running. Alessandro Bastoni gave Inter the lead with a free header from a corner routine. Lecce drew level when Mancosu volleyed past Handanovic from six yards. Inter pressed till the end, but Lecce was well worth their 1 -1 draw.  Third-placed Lazio registered a new club record of 11 consecutive top-flight victories when they crushed Sampdoria 5 – 1 on Saturday. Ciro Immobile scored a hat-trick and has now scored 23 goals this season. Caicedo opened the scoring after 7 minutes with Bastos scoring the fifth for the Aquile just before the hour. Linetty scored the consolation goal for Sampdoria who are just four points above the relegation zone. Milan snatched a tortuous and whirling 3 -2 victory over Udinese with Ante Rebic scoring the winner with the last kick of the game. Since the arrival of Zlatan Ibrahimovic, Milan had won on the bounce. A mistake by goalkeeper Donnarumma after 7 minutes gifted Udinese with an early lead. Rebic scored his first Serie A goal 3 mins after coming on as a second-half substitute. Theo Hernandez hit a left-foot volley to give the Rossoneri the lead with twenty minutes left to play. On 85 minutes Udinese equalized when Lasagna steered a header into the far corner. With essentially the last kick of the game, Rebic threaded a left-foot finish into the lowest corner. Leaders Juventus hosted Parma in the Sunday night game in Turin. Christiano Ronaldo opened the scoring just before half time with his seventh consecutive goal in a Serie A-game. Andreas Cornelius headed the equalizer for Parma from six yards. Four minutes later Ronaldo scored his second goal prodding the ball into the net from close range. The Bianconeri are now four points clear of Inter.

La Liga resumed after a short winter break with wins for leaders Barcelona and Real Madrid. On Saturday afternoon Real Madrid hosted fourth-placed Sevilla with a chance to be sole leaders of La Liga for at least 24 hours. It took almost an hour for Real to break the deadlock, Casemiro opens the scoring with a delightful chip over Sevilla goalkeeper Vaclik. Dutchman De Jong pulled Sevilla level with a left-foot curler. Casemiro doubled his tally for the day when he nodded in a Vazquez cross thus restoring the home sides lead. All the three goals came in the space of 12 frantic minutes. Eibar inflicted a surprise defeat to Real Madrid neighbours Atletico on Saturday night. Los Rojiblancos are now eight points behind leaders Barcelona and second-placed Real Madrid. Goals from Burgos after 11 minutes and Exposito on 90 minutes gave Eibar a deserved win, moving them further away from the relegation zone. On Sunday night Quique Setien made a winning start to his Nou camp reign as he led Barcelona back to the top of La Liga thanks to a Lionel Messi goal. Granada defended for most of the game and frustrated a ponderous Barcelona side. The loss of Sanchez after he was shown a second yellow card, weakened a well-drilled Granada defence. A moment of vintage Barcelona led to the only goal of the game on 76 minutes. Messi linked up with Griezmann; he passed to Vidal, who with a drag-back heel teed up Messi to hit home. The win sets Barcelona as league leaders on goal difference ahead of Real Madrid.

Ups and Downs in the football weekend