Being an avid birdwatcher in Malta presents its challenges, some of which might seem obvious like the lack of green spaces and the exploitation of the birds through hunting and trapping, but another tricky situation is the lack of a break throughout the year.

In fact no sooner have the spring migration and the breeding season come to an end that the first autumn migrants start making a most welcome appearance.

Bird migration is an annual spectacle which Malta gets to enjoy twice a year. In fact during spring migration which runs from late January to June birds would be moving north, away from their wintering quarters in Africa and beyond, to the warmer climate of Europe where most breed. In autumn, in preparation for the cold months to come and after having bred and raised their young, birds move south to warmer climates.

For many birds, hatched that same spring, this would be the first migration – a daunting task indeed which requires the crossing of large stretches of sea and also desert, in weather conditions which at times are prohibitive to say the least. Migrating birds tend to, for obvious reasons, stay clear of open seas as much as possible. This is in fact one of the reasons which makes Malta, despite its size, so very important for the purpose of migration acting as a stopover between Italy and North Africa.

Migration has over the years aroused a lot of interest in people with many questioning how birds migrate, the time taken, the speed with which such voyages are completed. Apart from the simplest tool which is observation, ornithologists have other techniques including bird ringing and more recently satellite tagging. It is fascinating when one can learn that the Robins which winter in our gardens are most probably the same birds year in year out and also that certain birds, despite their small size, can still fly all the way to the north of Europe in relatively no time at all.

Birds also migrate in totally different ways and patterns. Larger birds like heron species and flamingos tend to migrate in large flocks, with a mixture of adult birds assisting the younger ones in their maiden migratory journey. There is nothing more fascinating then witnessing a typical V formation of these large birds migrate overhead. The V formation is in fact a lesson in aerodynamics, a tactic adopted by these birds to ‘slice’ through the air with each taking turns to replacing the leading bird at regular intervals.

Another common species, the Barn Swallow, also migrates in considerable numbers. These birds in fact gather in what are known as pre-migration roosts were large numbers, running into several hundreds, gather to fatten up and rest before taking on the journey south together. There can be no migration without the mention of another class of masters of the skies – the birds of prey. These birds have adopted their own way of migrating. Their impressive wingspans collect the warm air being released from the land in the form of thermals and as a result soar to incredible heights from where they then glide with less effort and therefore waste of energy towards their destination.

This way of migrating is what makes our Buskett Woodland a top spot for observing birds of prey given that in the late afternoon when the air cools down and thermals are not so strong the birds decide to roost and migrate the following morning. Views of flocks of birds of prey soaring and gliding over Buskett are images which a birdwatcher rarely forgets and therefore eagerly awaits year in year out.

Buoyed by the interest bird migration generates, especially amongst the visitors to the nature reserves administered by BirdLife Malta, a project proposal was drawn up aimed at creating citizen science and also awareness about bird migration. In fact thanks to the Conservation of Wild Birds funding scheme the project will be enacted at Simar Nature Reserve, in Xemxija Bay. The project will see part of the nature trail re-branded into a migration trail that will carry visitors through the why and the how birds migrate.

Interesting and curious facts will also be on display with the public expected to get answers to common questions like what is the longest migration known or the why some birds fly in a V formation when migrating. A dedicated kids area will also be set up where through simple games children will understand the perils migratory birds face such as the lack of proper habitat for refueling purposes or inclement weather which can easily tire weak birds who might never make it.

Birds are already on the move so when outside enjoying the beaches or the countryside do look out because you never know what bird might turn up your way.

This year BirdLife Malta has launched its #onthemove campaign to showcase the beauty of the autumn bird migration spectacle. The campaign aims to inspire people to enjoy, care and protect Malta’s birds during the autumn migration. Visit the website to learn more about the campaign.

Members of the public are also being encouraged to log their bird sightings in a form which has been purposely created for this campaign here. 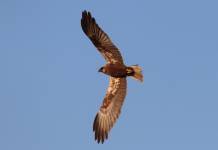