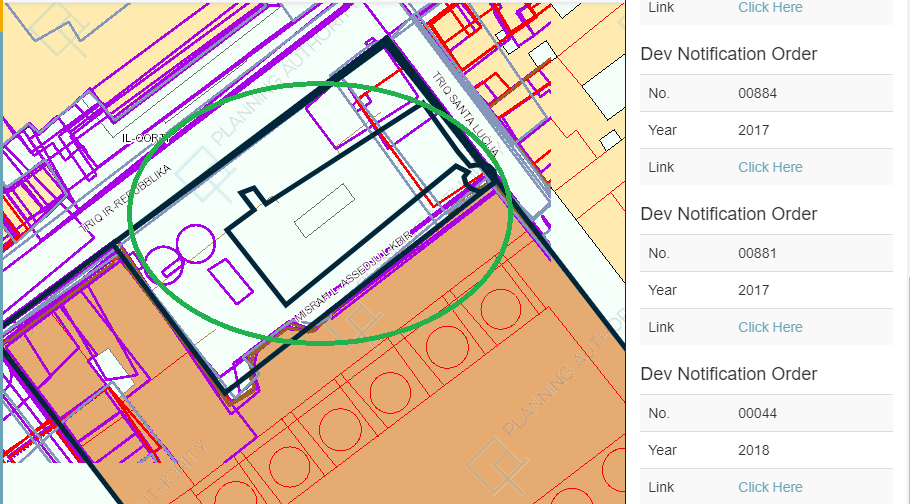 While government was very prompt in erecting hoarding around ‘restoration works’ on the Great Siege Monument, it has been very lackadaisical in replying to legitimate questions by Newsbook.com.mt on information which should be in the public domain. Newsbook.com.mt tried to get information on the restoration which was so speedily initiated after the September 8th national day celebrations. This portal sought, through various channels, to find out not only the permits covering this restoration but also the Restoration method statement which should be submitted to ensure proper management. This statement would also indicate the serious damages, if any, since restoration could cover from candle wax to an onslaught with a sledgehammer. The screenshot in caption shows clearly that there is no planning permit submitted for the works, yet another case where the authorities are flouting the law.

The Head of the Restoration Directorate, Perit Norbert Gatt, failed to provide this newsroom with the reference number of the permit covering the alleged restorations works at the Great Siege Monument. Gatt also failed to provide Newsbook.com.mt with a copy of the restoration method statement by the deadline set.

Both the Culture Minister Owen Bonnici and Perit Gatt chose to remain silent when asked questions related to the restoration.

Bonnici has yet to reply to questions that were sent in on Thursday afternoon. The questions, sent in writing as is always requested, were required by Bonnici himself after he declined to reply on record citing that he was in a meeting. Further attempts to get a recorded comment from the Minister were all in vain, as he ignored the WhatsApp messages. The questions dealt with the scaffolding erected on day and which was in relation to the “restoration” announced on his page on the day which was indeed polishing of the statue ahead of the wreath-laying ceremony at the Great Siege Monument.

Bonnici was quizzed by Newsbook.com.mt on Thursday regarding the “restoration”. He was asked when was the decision taken, how long will the restoration take, how come it was decided on the day an official government ceremony was scheduled, who was in charge and what works will be carried out.

This newsroom then tried to contact the Head of the Restoration Directorate Norbert Gatt who also declined a recorded interview and requested questions in writing. Gatt cited that given it was a public holiday he would not reply until Monday. The workers however were on site erecting wooden pallets around the Great Siege Monument. Gatt was similarly asked when was the decision taken and how long would the process take, as well as what works would this entail. Gatt was also asked about the timing of the action taken.

‘Objects which were not meant to be on the monument’

Instead this newsroom received a reply on the deadline from the Government’s spokesperson Etienne St John who said that “damage caused by the placing of objects which were not meant to be placed on the monument” led to the “immediate” intervention. According to St John, the Restoration Directorate is taking care of this process, and the works required will be continued in the coming weeks. St John further said that the works were coordinated with the Police and the Valletta Local Council and the works were started this morning in order “to avoid further damage on this unique patrimonial gem”.

Culture Minister in a Facebook post on Saturday said that the Heritage Malta experts would carry out restoration works on the stone right away. He also attached pictures to which he referred saying that these speak for themselves.

A look into the Planning Authority’s website does not show any Planning Applications for the “restoration works”.

Sources that spoke with this newsroom said that a permit would be required in the case of extensive works.

The monument by Antonio Sciortino was restored by environmental non-governmental organisation Din l-Art Ħelwa had restored the monument in 2010. The project was sponsored by FIMBank plc. The project was carried out in the summer 2010 and was concluded by 8 September of the same year.

Fawwara Chapel to be restored