Government ministries have said that according to the Building Regulations Office, there had been no reports against the contractor of the collapsed apartments in Pieta and their paperwork was order.

The announcement from the Ministries for the Family and Transport, come after last night’s collapse of a three-storey apartment block and a house on Gwardamangia Hill Street, Pieta.

The authorities say that they are currently collecting information from the relevant authorities with police investigations ongoing. It is also understood that the Housing Authority is also on the scene providing support to the families affected.

They have said that they will be offering alternative accommodation. 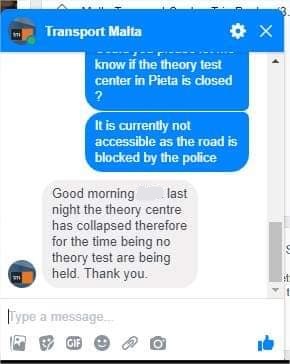 According to Transport Malta, all theory tests carried out through the Pieta driving school services have been cancelled and are expected to resume next week.

Police at the scene this morning informed residents and onlookers to stay back as it was feared there was a risk of further collapses.

According to sources speaking to Newsbook.com.mt, the family living in the house managed to escape their home with their dog just seconds before the collapse. One local resident who witnessed and survived the incident said that he survived by the grace of God.