No due diligence was carried out on Vitals – or any people behind it – before the company was awarded a concession on three public hospitals, a Court was told on Friday.

Watch: “Govt has the chance to revoke agreement with Steward Healthcare” – PN 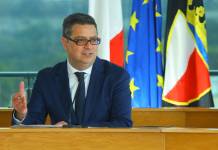 This admission was made by Nexia BT partner Manuel Castagna, a member of the adjudication committee that selected Vitals, in a case instituted by Nationalist Party leader Adrian Delia against former PM Joseph Muscat, Vitals Global Healthcare, the Attorney General and other public officials in a bid to cancel the concession. Vitals, a shell company registered in the British Virgin Islands, ultimately failed to meet its commitments, and transferred the concession to Steward Healthcare with the government’s blessing.

Speaking to journalists after Friday’s sitting, which was presided over by Judge Francesco Depasquale, Delia argued that the testimony vindicated his claims that the government failed to ensure that the public would not be ripped off by the Vitals deal.

Delia was represented by lawyer Edward Debono, though the PN leader – a lawyer by profession – made a point of asking a number of questions to witnesses personally.

He questioned how a newly-established company with a share capital of €1,000 could be deemed capable of investing millions, but Castagna insisted that there had been nothing untoward on this.

The committee, it turned out, based its conclusions on letters of comfort, which fall short of a legal guarantee. In the absence of the claimed financial clout, according to Castagna, there were grounds for rescinding the contract.

In a statement to the press, the PN’s secretary-general Francis Zammit Dimech insisted that Prime Minister Robert Abela could not remain idle, but had to decide with immediate effect.

“The people cannot afford to continue waiting while they are being robbed each day,” Zammit Dimech said.

He lamented that in spite of a lack of due diligence, and the failure to ascertain Vitals’ financial resources, the Labour government opted to forge ahead with its plans.

Zammit Dimech also pointed out that Castagna effectively argued that the contract signed by Konrad Mizzi should be revoked.