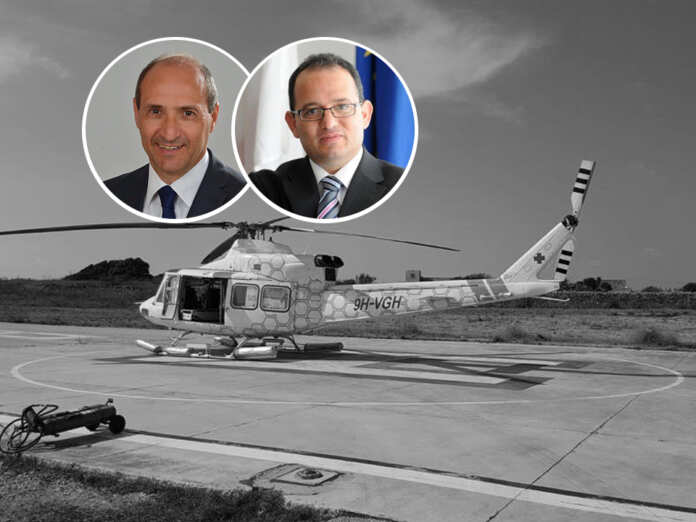 An inquiry ordered by Minister for Health Chris Fearne to investigate a case in which a patient died because the transfer from Gozo General Hospital to Mater Dei Hospital took too long, did not find that there was a deficiency in the helicopter service.

In a Facebook post, Said, who was first to say that the helicopter was not working, claimed that his version of the situation was not heard during the inquiry.

Read: Proof that the helicopter service was not available to take the patient to Mater Dei

A source in the Gozo General Hospital told Newsbook.com.mt that the helicopter was flown without a co-pilot, putting the lives of the patient, pilot, doctor and the nurse accompanying the patient at risk.

In a press release, the government said that the independent board, led by Professor Joe Cacciattolo, did not find a deficency in the hospital’s service.

The press release also contained part of the board’s conclusion, which stated that standard procedures were adopted according to protocol.

“The procedures followed were in line with established normal practice and protocols. No difficulties were encountered during the transfer of the patient from GGH to MDH. The patient was only transferred to MDH once the attending physician considered that it was safe to do so. The air ambulance helicopter was available when a decision was taken that the patient needed transfer to MDH.”

The press release also included another part of the inquiry’s conclusions, this time about the transfer by sea. The board discovered that there is no formalised agreement between the Gozo General Hospital and the Gozo Channel company. The board recommended that the agreement be formalised.

Proposals to mitigate impact of Covid-19 on professions put forward

Monique Agius   April 6, 2020
In a joint statement various bodies said that a meeting was held between Economy Minister Silvio Schembri and the representatives of the Chamber of Advocates, the Dental Association of Malta, the Kamra tal-Periti, the Kunsill Notarili ta' Malta and the Malta Institute of Accountants, where they presented Schembri with a framework for a National Strategy for economic measures to be considered by the Government in addressing the severe economic and social difficulties that were brought about by the coronavirus outbreak in Malta.

Amy Borg   April 5, 2020
The Malta Chamber of Commerce, Enterprise and Industry stated that it was the very first to raise the issue of price-abuse on the 10th March when it issued a media statement calling on all businesses to practice the highest ethical standards, when it comes to market-pricing, especially on necessary items during these challenging ties caused by the coronavirus pandemic.

Missing watching films with friends? There’s an ‘app’ for that

Coryse Borg   April 4, 2020
Thanks to a free browser extension, you can now recreate the feeling of watching a movie with your friends or family members while not actually being in the same room as them.

MDB COVID-19 Guarantee Scheme not attractive at all, say GBC and...