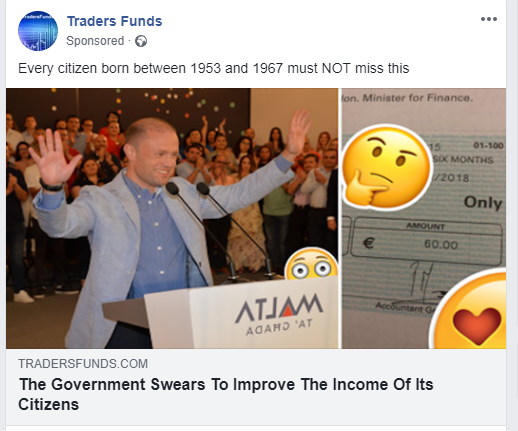 The Malta Financial Services Authority (MFSA) said that the Bitcoin Revolution does not hold any kind of authorisation whatsoever by the Authority. Newsbook.com.mt asked the MFSA to clarify the status of the Bitcoin Revolution after Malta based Facebook users were targeted by a crypto-scam posing as Malta Government investment target.  The MFSA told Newsbook.com.mt that no person is currently authorised under the Virtual Financial Assets Act stating that such authorisations and approvals will be publicly listed on the MFSA Financial Services Register.

When asked if the Authority will be investigating the case, the Authority said that it was looking into the matter and will take any action which it may deem necessary. The MFSA also cautioned the public to be vigilant and careful with regards to investments being sold through the internet.

Under the VFA Act such sites would be regulated under articles 13(1) and 29 (1) which state that no person shall provide or hold itself out as providing a VFA service in or from within Malta unless the entity or person is in possession of a valid licence granted under this act and that no person or entity may issue or cause to be issued an advertisement relating to a VFA service unless they are licence holders, respectively.

The Act grants the MFSA the power to take the necessary enforcement actions.

Various pages under different names however similarly structured have been targeting Maltese audiences on Facebook. Such pages were Tech Ride News, Organic Decors, Trade Funders among others.

The MFSA replied to questions sent in by Newsbook.com.mt 13 December only on Monday morning.

In a brief and dry statement on Monday afternoon the Government stated that a police report was filed so that such websites would be investigated. The Government further stated that it was taking such claims seriously saying that such websites and articles were not only fraudulent in nature but attempted to cast a shadow on the Government. However such ads which also spoofed CNN Tech using articles to praise fictitious government investment in attempt to lure investors.