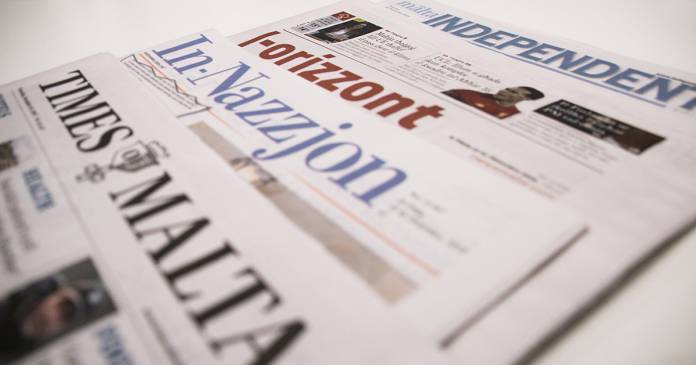 These are the main stories from today’s front-pages.

L-Orizzont follows a press conference addressed by Public Health Superintended Charmaine Gauci who said that authorities are using all available measures to take precautions against the coronavirus.

Malta Today reports on a statement by the Health Ministry urging people to avoid ‘nonessential travelling’ to coronavirus hotspots around the world. Passengers returning from the listed countries are being advised to self-quarantine for 14 days.

The Independent quotes Michael Borg, head of the Infection Control department at Mater Dei, who said that it is more important for people to sanitise their hands than to wear face masks to resist the spread of Covid-19.

The Times says that health authorities have been trying to reassure the public over the coronavirus risks after reported cases rose in Italy and reached Sicily. Supermarkets and pharmacies have been hit with panic buying by alarmed customers.

In-Nazzjon says that a Maltese couple returned from Bergamo, in the north of Italy, with a heavy fever. They have been advised by authorities to stay at home until further medical investigations are conducted.

Malta Today reveals that the former CEO of Vitals Global Healthcare, Ram Tumuluri, had given himself a €5 million bonus in his third year at the helm of the privatised hospitals. The paper says that the payment was a condition in his contract.

In-Nazzjon says that PN Leader Adrian Delia will take part in a special edition of TV programme Sorsi Infurmati on Wednesday which will discuss the government’s transfer of three state hospitals to VGH, later conceded to Steward Healthcare.

The Times speaks to one of the 17 Nationalist MPs calling for Adrian Delia’s resignation who said that plans for a dual leadership of party and opposition have been discarded because the risk of a split would be too great.

The Independent reveals that former PN treasurer Boris Xerri will be named head of the party electoral commission following the resignation of Angelitos Sciberras. Xerri had left the commission immediately after Adrian Delia was elected PN Leader.

L-Orizzont carries an interview with Caritas director Anthony Gatt who warned against the threat of substance abuse among young people, following reports of a sleeping pill overdose by three school children. Gatt said that one drug type generally leads to another.

Malta Today quotes Prime Minister Robert Abela who, in a meeting with EU Home Affairs Minister Ylva Johansson, said that Malta can no longer tolerate a situation of disproportionate burden in migration and demands a European solution.