The compilation of evidence against Yorgen Fenech, accused of complicity in the assassination of journalist Daphne Caruana Galizia, continued on Thursday at noon.

Pardoned middleman Melvin Theuma testified again as new recordings of conversations between himself and Yorgen Fenech will be heard.

Inspector Keith Arnaud said that in the case of Keith Schembri and Kenneth Camilleri, the Police needs more time to investigate certain information.
Amy Borg
17:47 The court has ordered for the recordings to be cleared from any background noise during the conversation between Theuma and Fenech.

The court will appoint a sound engineer to carry out the task.
Amy Borg
17:41 The defence is asking the court if it is possible if prior to Theuma's cross-examination Johann Cremona, Keith Schembri and Kenneth Camilleri are called to testify.
Amy Borg
17:39 Magistrate Montebello said that the cross-examination can start once the transcripts are corrected.
Amy Borg
17:39 The defence is asking the court if the cross-examination can start.
Amy Borg
17:33 Melvin Theuma's testimony ends here.
Amy Borg
17:33 Theuma does not recall the words said.
Amy Borg
17:18 Azzopardi is referring to a particular word in the conversation and wants Theuma to listen to the recordings again.
Amy Borg
17:15 Asking Thuema if he remembers Yorgen Fenech telling him that Chris Cardona was admitted to a hospital in Sliema and if Cardona was taken to hospital after he pointed a gun down his own throat, Theuma said he does not remember.
Amy Borg
17:07 When saying that il-Fulu received the money from them as well. Lawyer Azzopardi asked Theuma if he knows "them" to whom he is referring in the recordings.

Theuma said that he is referring to Cardona but does not know if it is in reference to other people connected to Cardona.
Amy Borg
17:05 Theuma said he had asked Fenech if Valletta was to be removed from the investigation of the murder and Fenech reassured him it will not happen.
Amy Borg
17:04 "Rega gej ghal Whisky" – is being heard in the recordings in reference to Silvio Valletta.
Amy Borg
16:58 Lawyer Azzopardi is asking Theuma if Valletta used to receive bottles of Whisky from Fenech in exchange for information on the murder.
Amy Borg
16:58 Lawyer Jason Azzopardi is asking question to Theuma on the recordings.
Amy Borg
16:56 Melvin Theuma does not remember if during December 2018 Silvio Valletta was still the Police Deputy Commissioner.
Amy Borg
16:49 The conversation goes on between the two discussing the murder and what happens in the eventuality they get caught and Theuma would be arrested in connection with the murder.
Amy Borg
16:45 Theuma is explaining that during one of the conversations he told Fenech that they might be arrested but all will be settled through Fenech's connections.
Amy Borg
16:43 Magistrate Montebello is warning the defence lawyers to not pass comments during the testimony of Theuma.
Amy Borg
16:39 Inspector Keith Arnaud continued to question Theuma.

Unfortunately, social distancing cannot be observed although everyone is wearing a facemask or a visor.
Amy Borg
12:25 Melvin Theuma is summoned to take the witness stand.
Amy Borg
12:24 Magistrate Montebello has entered the courtroom.
Amy Borg
12:23 Yorgen Fenech's defence lawyers are Marion Camilleri and Gianluca Caruana Curran and Charles Mercieca whilst the prosecution is being led by inspectors Keith Arnaud and Kurt Zahra, assisted by the Attorney General. 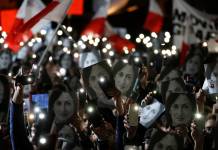 “If I go down, I’ll bring everyone else down with me” – Fenech’s doctor