The Qawra Primary School is expected to be finished this year.

The building of the school was meant to be finished in 2017. In August 2019, The Foundation for Tomorrow’s Schools (FTS) had stated that the school would be open for the following scholastic year, meaning September 2019. Indeed, the FTS website as yet still states that “this project commenced during the 2017-2018 scholastic year and will be completed in September 2019.”

MP Clyde Puli asked about the Qawra Primary School in Parliament, directing his question at Minister for Education Owen Bonnici. To this, Bonnici responded that the school will be ready this year, in 2020. 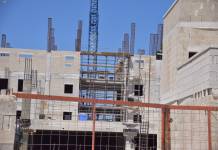 In August 2019, works were underway on the third floor of the new Qawra Primary School. Mechanical, electric, tiling and plastering works were in progress on the other floors.

The FTS website states that the primary school will hold 500 students which will complement the existing one. It will house a kindergarten and a childcare centre. The school will have 39 classrooms and a multipurpose hall. The school will also have a futsal ground, 2 badminton courts and an indoor gym. The school’s footprint will be 7,000m2. There will also be an underground car park with a footprint of 15,000m2 which translates into 400 parking spaces.