Newly-consecrated Bishop of Gozo Anton Teuma argued that the strength of his diocese – and of the Church – did not derive from displays of power but from its ability to serve its flock as he made his solemn ingress into the Cathedral of the Assumption on Wednesday evening.

Though a new bishop’s solemn ingress generally takes place on the same day of his episcopal consecration, restrictions related to the Covid-19 pandemic led to a change of plans for Gozo’s ninth bishop.

While Mgr Teuma was consecrated at the Xewkija Rotunda – Gozo’s largest church, chosen to allow as many people as possible to attend in light of Covid-19 restrictions – the solemn ingress, by necessity, takes place at the diocese’s cathedral, the home of the bishop’s seat or cathedra.

In his homily, he cited Jesus as an example of what leadership truly meant, through his self-sacrifice.

“It is clear that for Jesus, leading the Church means being the first to serve others, to place others’ concerns before your own,” Bishop Teuma said. Though the principle was easy to explain, he acknowledged that it was not as easy to put in practice.

The bishop warned that one had to be careful not to be tempted by the trappings of power, and emphasised that everyone was equal in the eyes of the Church. The faithful were not grouped into ranks, but all were at the same level, even as they occupied different roles – priests, people who have taken other religious vows, and lay people – which relied on each other.

“How wonderful it would be if the diocese transforms itself into a continuous cycle of service and love, and that unite we live in this spirit of service to others,” Bishop Teuma mused.

The bishop emphasised that the Church needed to overcome the logic of power and rivalries, as this was essential to achieving peace. Getting one’s way might provide short-term satisfaction, he conceded, but it would ultimately give way to “suspicions, fears and backbiting.”

“But if instead of a quest for power, there is a quest to serve and to love, the difference is enormous,” he added.

But this proved to be an impractical arrangement at a time when communication and travel between the two islands was limited, and its clergy and people long desired the establishment of a separate diocese. Their request was finally granted by Pope Pius IX through a Papal Bull issued on 16 September, 1864, and Mgr Michele Francesco Buttigieg was consecrated as the first Bishop of Gozo six days later.

Bishop Teuma is the 9th Bishop of Gozo, having succeeded Bishop Mario Grech, who was today confirmed as the Secretary-General of the Synod of Bishops. 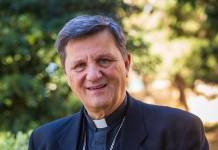 In his homily, he paid tribute to his predecessor and described his appointment to a prestigious Vatican post as an important chapter in the history of the diocese.