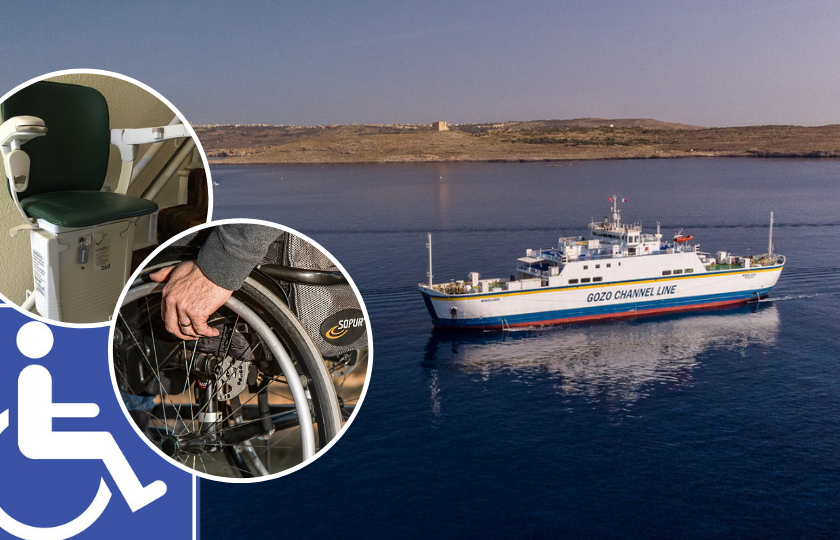 The Commission for the Rights of Persons with Disability (CRPD) has stated that the temporarily rented Gozo Channel ferry ‘Nikolaos’ isn’t equipped with a lift, and instead, it has a stair lift.

A spokesperson for the CRPD told Newsbook.com.mt that while the Gozitan company Gozo Channel was informing members of the CRPD about the ferry’s accessibility, it stated that “people lacking mobility can make use of the ferry’s stair lift which lead from the garage up to the upper side of the ship”. On the other hand, the other three Gozo Channel ferries are equipped with lifts which can carry around eight people.

A spokesperson for the Minister of Gozo has also confirmed with Newsbook.com.mt that ‘Nikolaos’ has a stair lift instead of a lift.

“This creates a problem for persons using mechanical wheelchairs”

The CRPD added that this creates a problem for people in wheelchairs as there is no facility which can transport them to the lounge area. The Commission also said that it is informed that the ferry is only being using temporarily.

It was also said hat the ship has a priority lane for those that have a Blue Badge or a special ID. There are also evacuation chairs “as a safety measure”.

Upon the arrival of the new ferry, Minister for Gozo Justyne Caruana said that for the summer period, Gozo Channel will be operating three ships instead of the usual two, and an additional ship will be used for commercial vehicles. This new scheme will start on Monday 17th June, ad will see an increase of around 16 journeys.

You can watch the arrival of the new ferry here.