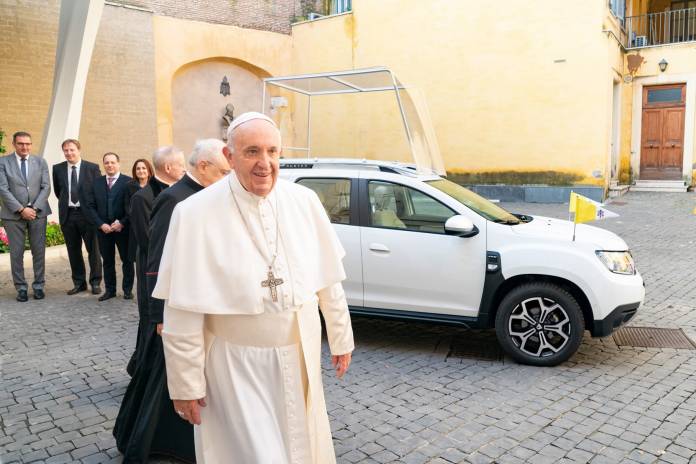 The budget SUV has been adapted to suit papal needs by Dacia’s Prototype department and Special Needs Team, in partnership with Romanian coachbuilder Romturingia.

The new Dacia Popemobile offers the same five-seat layout as the standard Duster but has a “particularly comfortable” rear bench added to suit lengthy public parades.

Also featured are a large sunroof, roof-mounted grab handles and, as is customary with Popemobiles from all marques, a removable transparent display box to allow crowds a better look at His Holiness.

“With this gift to His Holiness, Groupe Renault renews its strong and continuous commitment to putting man at the centre of its priorities,” said Martinet.

The Duster is finished in white with a leather interior, and its suspension has been lowered by 30mm to allow for easier ingress and egress.

The Duster won’t be the Pope’s first experience of a Dacia; during a 2016 visit to Armenia, he used an unmodified example of the Logan saloon as his official transport. The Dacia Duster has been a high-selling budget SUV in Europe and Malta.

This content was supplied by Kind’s Auto Sales Ltd

Photos: Pope urges Thais not to see Christianity as ‘foreign’

Monique Agius   January 19, 2020
The rights of EU citizens in the UK are still shrouded in uncertainty, the MEP said, predicting that such rights would be weakened.

Monique Agius   January 19, 2020
Delia asked Prime Minister Abela whether he was aware that Valletta travelled with Fenech. "If you did know, do you think it is acceptable for Dr Caruana to still be minister?" Delia asked. He urged the newly appointed Prime Minister to take action if he was not aware of Fenech and Valletta's trip.

A more contemporary identity for the SME representative body