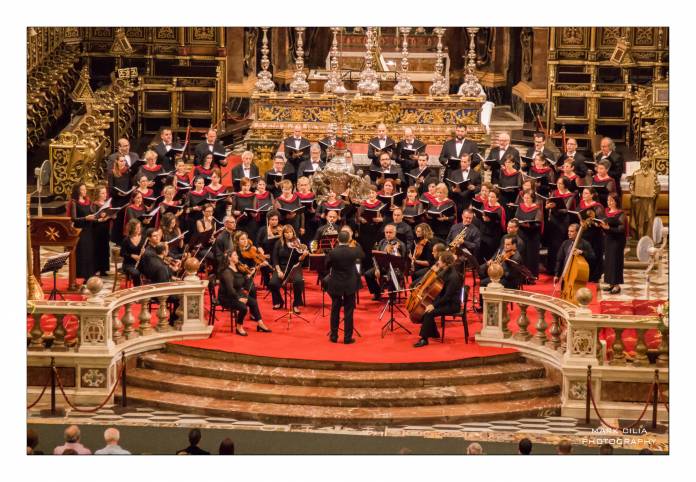 The New Choral Singers’ presents ‘A Choral Celebration’ on the occasion of the choir’s silver anniversary on Friday 25th October at St. John’s Co-Cathedral in Valletta.

The concert is being conducted by Mauro Farrugia and internationally-acclaimed conductor Wayne Marshall, who will also be enthralling guests on the organ. The evening will also feature Marouska Attard (soprano) and Clare Ghigo (mezzo-soprano), with Sarah Spiteri leading the orchestra and Irina Fedcenko-Carbonaro on the harpsichord.

The New Choral Singers came together as a small group of friends sharing their passion for music back in 1994 and is today a 70-strong mixed choir. It is one of the foremost local polyphonic vocal ensembles.

These past twenty-five years have seen the choir grow in leaps and bounds as it sought to challenge itself further, expanding its repertoire while at the same time contributing to the volunteer sector in Malta by raising funds for various worthy causes. Apart from performing to packed audiences in a variety of localities around Malta, The New Choral Singers has also performed abroad, most recently in the majestic surroundings of the landmark Cathedral in Bressanone, Northern Italy, and before that in the Basilica Superiore di San Francesco, in Assisi, in a concert under the patronage of the Grandmaster of the Order of the Knights of St. John.

This month’s commemorative concert will showcase the choir’s musical abilities since the programme includes compositions that are varied in nature, from the large-scale baroque splendour of Antonio Vivaldi’s Magnificat to works by Gabriel Fauré, Hubert Parry, and a number of a cappella works. Nobes’ work was written specifically as an anniversary gift for The New Choral Singers by the composer, an English choir conductor, musician and friend.

For this special occasion, Wayne Marshall will also be performing his very own Psalm 150 together with the choir whilst the group will be premiering Mauro Farrugia’s own latest work, a Te Deum.

Entrance is free of charge, but a retiring collection will be held in aid of Caritas Malta, which itself is marking 50 years since its inception. Guests are kindly reminded to refrain from wearing stiletto/narrow heels inside the Co-Cathedral.

This concert is being supported by APS Bank plc.

The New Choral Singers is a registered voluntary organisation with registration number VO/0343. For more information, you may visit their website.

Amy Borg   July 6, 2020
The 284 migrants will be relocated in two phases; one group of 204 and another group of 80 migrants. The Maltese government said that there is co-operation from the other member states which will welcome the migrants. Also, the whole co-operation process is being reviewed by the European Commission.