Long-distance swimmer Neil Agius has just arrived in Sliema after completing a 100+ km swim from Sicily to Malta to raise awareness for Wave of Change Malta, which organises the ‘Clean Seas Campaign’.

Upon his arrival, Agius said: “All I’m asking is for people to join the Wave Of Change. Just pick up three pieces of plastic, put up a photo with #waveofchange, and tag three friends or colleagues to do the same.”

The swim took just under 30 hours after he set off from Ragusa in the early hours of Thursday morning, swimming nonstop and unassisted (this means that at no point was he allowed to even touch the boats accompanying him). 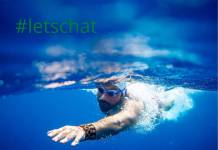 During an interview with Newsbook.com.mt, Neil said that training is the hardest part of all of this; he swims six times a week which includes waking up at 1.00 am on Friday morning and going swimming for 9 hours… and then doing it all again on Saturday.

The last time this endeavour was attempted was 35 years ago by Nicky Farrugia in 1985.

Agius represented Malta at five editions of the Games of the Small States of Europe, the 2004 Olympic Games in Athens as well as various FINA World Swimming Championships.

Partit Nazzjonalista MP Robert Cutajar congratulated Agius on behalf of the PN, saying that he clearly showed how important a sport can be in order to convey messages in the interest of the common good, such as creating more awareness of the importance of a cleaner sea.

Parliamentary Secretary for Youths, Sports and Voluntary Organisations Clifton Grima also congratulated Agius, as well as all those who accompanied him on the swim.

The President and Executive Committee, on behalf of all the Aquatic Sports Association members also congratulated Neil for this impressive achievement and said that he is an inspiration to his students and peers.

#5x5Challenge: How can I make a difference to the environment I...