A new National Gene Bank has been launched, to serve as a repository for local wild plants and collect and store seeds for conservation and for agricultural use.

The gene bank at the Plant Biotechnology Centre complements existing investments at the Plant Protection Directorate. The directorate has just been handed control over the St Vincent de Paul Nursery, and has launched a project which will see the nursery rid itself of foreign fruit tree varieties in favour of conserving and promoting local ones. 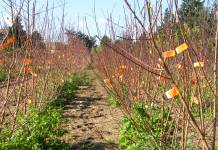 In a visit to the facility, Agriculture Minister Anton Refalo said that the gene bank would have the means to generate and analyse genetic diversity. The availability of germplasm and its genetic database will contribute to worldwide efforts to contribute to food security, and to help develop new varieties which are resilient to common problems such as drought, soil salinity, changing climates and diseases.

The project is the result of a €3 million investment, Plant Protection Directorate acting director Maureen Delia said. This will mostly be covered by local funds, but the project has benefited from €900,000 in EU funding through the European Agricultural Fund for Rural Development.