In a statement, the Office of the Prime Minister explained how Muscat, accompanied by the Minister for Foreign Affairs and Trade Promotion Carmelo Abela, paid an official visit to Palestine upon an official invitation by President Abbas.

During his stay in Bethlehem, Muscat held separate meetings with President Abbas and with the Palestine Prime Minister Mohammad Shtayyeh.

The Prime Minister was also invited to attend the Christmas Midnight Mass in the Church of Nativity together with dignitaries from across the world. 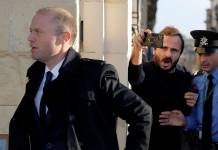 A season of Christmas activities at APS Bank

John Paul Cordina   February 27, 2020
A man has filed a constitutional case claiming that his right to a fair hearing is being breached since the opposing party’s lawyer – Pawlu Lia – sits on the Commission for the Administration of Justice.