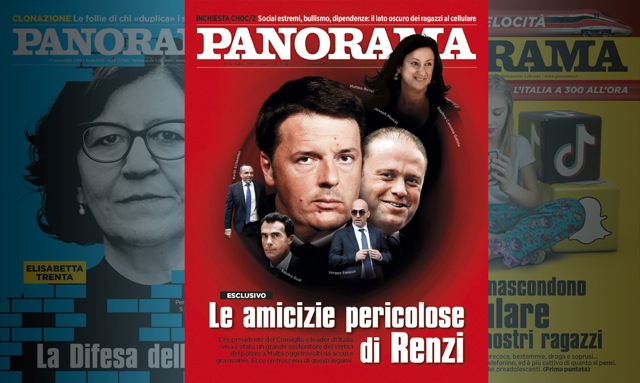 Prime Minister Joseph Muscat’s close affinity with former Italian PM Matteo Renzi was placed in sharp focus by the popular Italian magazine Panorama. The focus of the story is the ‘dangerous liaisons’ both between the erstwhile Italian Premier and his Maltese counterpart, as well as how this ‘close affinity’ is tied to common interests such as migration and a Sicily-Malta gas pipeline.

The Panorama article draws heavily on already published information, from the late Daphne Caruana Galizia’s Running Commentary pages to recent revelations emanating from the arrest of Yorgen Fenech as the purported mastermind of the murder of the investigative journalist. Panorama’s article serves as a good comprehensive exercise which links the Who’s Who in the whole sordid tragedy. This intricate web, comprehensible in Malta, if just barely, includes in it the “amicizie imbarazzanti” (embarrassing friendships) which Renzi, Panorama’s main target, formed in Malta. Panorama spared no one: from Joseph Muscat and his wife Michelle, to his former Chief of Staff Keith Schembri whom the Caruana Galizia Family, it says,“lo accusa ti essere il vero mandante”(accuses him of being the true mastermind). Included in the web are Minister Chris Cardona, former Communications Chief Kurt Farrugia, former minister Konrad Mizzi and Yorgen Fenech. The last, though he stands accused of the murder, featured only marginally in the article.

Two major aspects emerge from the Panorama article: the Azeri Connection and the Issue of Immigration. Panorama quotes extensively Daphne’s Running Commentary on Muscat’s furtive meeting in Baku (Azerbaijan) with President Aliyev as well as Tony Blair’s involvement as a consultant on possible pipelines. “Non solo, a Renzi e Muscat sta a cuore un altro gasdotto fra Sicila e Malta, che dovrebbe pompare gas” (Not just, for Renzi and Muscat, another pipeline was close to their heart: that between Malta and Sicily which had to pump Azeri gas). Pointing out that Yorgen Fenech had invested heavily in the energy sector and purportedly greased many political palms, Panorama recalles that in July 2019, the agreement for the Sicily-Malta gas pipeline was finalised.

The immigration angle, Panorama questioned why immigrants who were found in Maltese SAR area were taken in by Italy. It underscored the great friendship between Renzi and Muscat to the extent that “pochi mesi prima dell’omicidio di Daphne, l’attuale leader di Italia viva era sull’isola davanti a una folla di sostenitori dell’ partito laburista. Dall’palco dell-comizio ribadiva ‘Joseph Muscat era, e rimarra, mio amico’” (a few months before Daphne’s murder, the current leader of Italia viva was on the island addressing a crowd of labour supporters. From the stage at the meeting, he said:’Joseph Muscat was and will remain my friend’)