Only 30% of SMEs expect to remain in operation for more than a year if the current economic situation – brought about largely as a result of the Covid-19 pandemic – persists, according to a survey carried out by the Chamber of SMEs.

The survey, conducted among Maltese businesses between 29 June and 4 July, suggests that these grim prospects follow a notable drop in business.

Nearly a third of businesses (31%) reported that sales fell by a staggering 90% when compared to 2019, though in this case, the difference between essential (17%) and non-essential (42%) businesses was stark.

Ultimately, 22% of those surveyed predicted that they would not be able to survive for more than three months in the current situation, while a further 33% feared their time would run out in 6 months.  Another 15% believed that they could keep things going for a year, but not any longer.

Businesses’ main concerns were sales levels (79%), followed by uncertainty (69%) and employee wages (57%). 45% expressed concern about collecting payments, 33% about paying utilities and a further 31% about paying rents.

According to the survey, 13% made employees redundant as a result of Covid-19, with most laying off less than a tenth of their workforce.

But when asked what business decisions they expect to implement by the end of the year, 14% of respondents said that they would be starting redundancies.

Almost half (48%) did not expect to implement significant changes, while 16% felt they may open up new opportunities by investing in eCommerce and online marketing. 9% planned to change the services or products they offered, while 6% planned to invest in new businesses.

However, 6% foresaw that they would be closing outlets, while a further 1% felt that a declaration of bankruptcy was imminent.

Respondents were also asked to rate the assistance they received during the pandemic, and in general, the scores they gave were not particularly high.

72% of respondents declared that they were eligible for the government’s Covid-19 support measures, but when asked how much this assistance helped them, these measures barely made the grade: the ratings translated to an average score of 54.5%

The support provided by banks during the pandemic was judged more harshly, failing to make the grade with an average score of 39.3%.

SMEs which relied on the use of rented property – 56% of respondents did, at least in part – were also asked to rate the government’s rent-related assistance, through which they were eligible for a grant of up to €2,500. The chamber had itself called for rental aid to be improved. 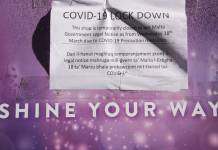 But the survey showed that respondents did not think highly of this measure; their ratings translate to a score of 31.8%.

Most SMEs rented property from private landlords, and 46% of these said that they received no assistance from their landlord during the pandemic. However, 18% postponed rent, 20% reduced it, 6% went as far as waiving rent, while 10% provided some other form of assistance.

The pandemic has led to an increase in the use of teleworking, but 57% of SMEs surveyed either did not or could not implement telework.

Among the rest, 17% rated teleworking positively, 5% rated it negatively, and 21% expressed mixed feelings.

Nevertheless, the vast majority (73%) expected to keep some form of teleworking arrangement going, with 21% replying affirmatively in the negative.

Businesses doing worse than when closed, Chamber of SMEs says