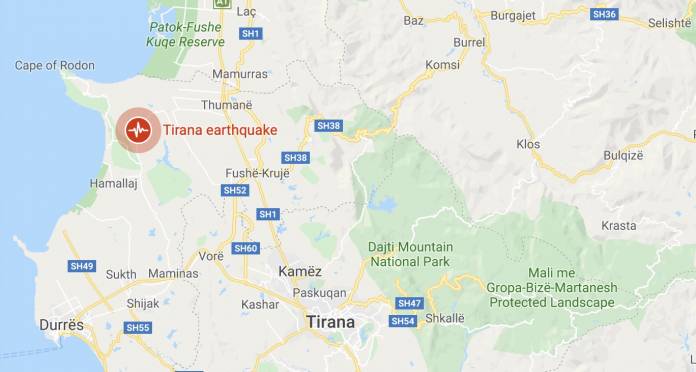 The strongest earthquake to hit Albania in decades rocked the capital of Tirana early on Tuesday, sending panicked residents rushing into the streets and causing at least one building to collapse in the nearby port town of Durres.

The 6.4 magnitude quake struck shortly before 4 a.m. local time (0300 GMT), the U.S. Geological Survey (USGS) said, the second powerful tremor to hit the region in two months. It was centred 10 km (6 miles) northwest of Shijak, between Durres and the capital, at a shallow depth of 10 km, the USGS said.

Unverified video footage posted on social media showed what appeared to be a collapsed building in Durres, 40 km west of Tirana, on the Adriatic coast. Other footage showed buildings with large cracks and fallen masonry, including one apartment with most of a bedroom wall missing.

“Firefighters and army staff are helping residents (caught) under the rubble”, in Durres and the nearby village of Thumane, a Defence Ministry spokesperson told reporters.

Two government spokesmen told Reuters the biggest damage to buildings was in Durres and a few people had been taken to hospital in Tirana.

Asked about loss of life, an Interior Ministry spokesman said: “I am told there is not any.”

A Reuters witness described residents fleeing apartment buildings in Tirana, some carrying babies. Power was down in several neighbourhoods.

Located along the Adriatic and Ionian Seas, between Greece and Macedonia, Albania experiences regular seismic activity.

An earthquake with a magnitude of 5.6 shook the country on Sept. 21, damaging around 500 houses and destroying some. The Defence Ministry had said it was the most powerful quake in Albania in the last 30 years.

The Balkan nation is the poorest country in Europe, with an average income of less than a third of the European Union average, according to Eurostat data.

John Paul Cordina   October 31, 2020
Usury can drive its victims to end their lives – or to violence.