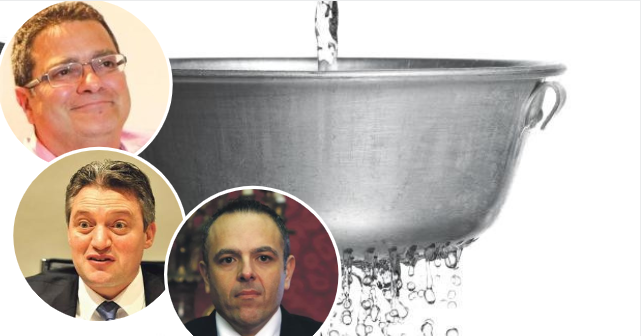 Within a space of two weeks the Sunday Times of Malta led it front page with its second and third exclusive stories based on “police leaks”. This morning the Sunday paper said that police investigators told it that while it was true that their investigation was currently focused on the ownership of 17 Black, they would “eventually” also look into its alleged links to the Minister Konrad Mizzi, Chief of Staff of the Prime Minister, Keith Schembri “and others”.

In a below the fold front page story the paper said that “police sources” confirmed to the paper that an intelligence report compiled by the Financial Intelligence Analysis Unit was handed over to them in March and it allegedly directs a London-based prostitution racket and the alleged involvement of Opposition leader Adrian Delia way back in 2004.

Two editions ago on November 18 the Sunday Times of Malta reported that  according to a “police sources’” leak the masterminds behind the assassination of Daphne Caruana Galizia had been identified. That same evening Reuters Journalist, Stephen Grey had tweeted quoted an “authoritative source” saying that that those behind the assassination were ‘identified is NOT TRUE’. (caps by Reuters journalist)

The Sunday Times said that according to “police sources” Keith Schembri and Konrad Mizzi “fall within the scope” of the 17 Black criminal investigation. Reuters journalist Stephen Grey together with Times of Malta  revealed that the owner of 17 Black is Yorgen Fenech, the CEO of Tumas Group and one of the owners of Electrogas. Leaded emails from Nexia BT showed that 17 Black was going to channel €150,000 a month into the Panama companies of Schembri and Mizzi who deny that they have received any money.

A spokesman for Prime Minister Joseph Muscat told The Sunday Times of Malta when contacted on Saturday that Dr Muscat had no role in the ongoing investigation. The same spokesman noted that the Sunday Times was not saying that “Konrad Mizzi and Keith Schembri are under investigation but that throughout the process they might fall ‘within the scope’ of the investigation.”

The spokesman made an analogy with the leak that there is a police investigation on the Fekruna land deal and added without further explanation that former minister Jason Azzopardi will also probably fall within the scope of the investigation as he was theresponsible minister back then.

Police sources told the paper that a London-based prostitution racket and the alleged involvement of Opposition leader Adrian Delia are part of an ongoing money-laundering investigation by the police after last March they received an intelligence report compiled by the Financial Intelligence Analysis Unit.

The Sunday Times does not state that it saw the report of FIAU.

The report than summarises the reports about Delia in the run-up to the leadership election in the summer of 2017, describing them as reports written  “about two months before she was killed in a car bomb explosion outside her Bidnija home.”

In a statement the leader of the Partit Nazzjonalista, Adrian Delia, strongly denied the report which he described as “spin from Castille”. He said that he had only acted as a lawyer to the person under investigation. Delia referred the Sunday Times to a report carried in Times of Malta (13/09/2017) titled “Delia offers ‘hard evidence’ on London property claims” as proof that he did nothing wrong. Delia said that the story was leaked because he is constantly attacking the corruption of Konrad Mizzi and Keith Schembri, concluding that he fears no investigation.

The Partit Demokratiku said in a statement that they have presented a motion of no confidence in Konrad Mizzi and reiterates their call to the Prime Minister to suspend Keith Schembri.