In a statement, the police gave no details and neither did it make a link to the middleman’s shocking testimony. Theuma mentioned former Chief of Staff Keith Schembri as his ‘mole’ and other high powered OPM officials as part of a network of henchmen, among whom he mentioned Sandro Craus – Rabat Mayor and Head of OPM Customer Care and Kenneth Camilleri former Security Service police and part of the PM’s security detail.

In the same statement, the police explained that while 4 persons have already been arraigned in connection to the murder of the journalist, intensive investigations are still going on on the homicide angle, the economic crime angle and with the ‘active contribution of Europol’. The statement added that all investigations are being conducted under the aegis of a magisterial inquiry, adding that no further details will be given out due to the sensitivity of the case. 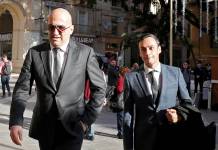