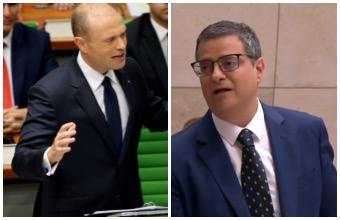 Opposition leader, Adrian Delia said during the emergency debate on the NAO report, that the Delimara power station was, ‘a money laundering machine that is stealing from the people’s pockets’.

Delia was reading through the various inconsistencies raised by the Auditor during the investigation into the tendering process for the Delimara power station build by Electrogas.

He highlighted that the report showed none of the bidding parties complied fully with the regulations but some were more favoured than others. This could be seen with the way that Electrogas was treated with leniency in spite of its €20 million shortfall in its project financing.

Delia also pointed to the concerns that Malta would be paying €200 million every two years for energy created by Electrogas production despite there being a viable and cheaper alternative. The NAO had reported that the government had agreed to an 85% purchase of Electrogas’ production.

The Prime Minister said that the Opposition there were being ‘amateur’ about the energy issue.

He explained to the PN leader that change is just part of a tender process, saying that none of the apparent inconsistencies would’ve changed the outcome.

The PM then outlined that there were some ‘shortcomings of the Auditor General’s report’, namely the accounting for the €300 million capital expenditure for the interconnector. Had this been done, there would be a better comparison between the cost of it versus the power station.

“Because of this energy mix we now have, our electricity prices are now the second lowest in Europe.”, he explained.

Delia also brought the subject of the power station tender, in line with the revelations behind 17Black and the connections between the company, Konrad Mizzi’s lawyer Brian Tonna and the owners of the Delimara power station.

‘Government denials have become irrelevant. The people have realised that this power station is a money laundering machine that is stealing from the people’s pockets’, he said.

Responding to the PN Leader’s comments, the Prime Minister turned the debate on Delia, raising the news of Delia being under investigation over money laundering.

‘I don’t think there is anyone more apt to tell us about money laundering than a person who is being investigated for it, according to reports.’ Muscat said.

The PN leader then demanded he deliver proof for the claim, to which the Speaker Angelo Farrugia said the news had come from The Sunday Times of Malta.

‘If he is so annoyed, Delia can institute libel proceedings against The Sunday Times of Malta’, the Prime Minister said.