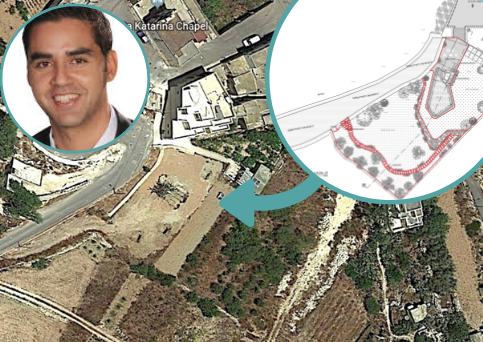 Minister Ian Borg and his wife Rachelle have filed a planning application, PA/05334/18 to develop a piece of land found in out of development zone into a pool and ancillary facilities. The ancillary facilities include an outdoor dining area, flagstone decking, a shower and soft landscaping.

The field is located along the only public panoramic view point of the Wied Liemu valley at Santa Katerina. The hamlet of Santa Katerina enjoys a level of protection granted through the North West Local Plan policies NWRS3 and NWRS4. These protect the area in several ways, particularly against sprawling dwellings.

The field is adjacent to Borg’s matrimonial house over which a controversy had arisen back in 2014 when the Ombudsman Office had concluded that the approved application as a “grave error”. Despite the calls to the Planning Authority for a revocation of the application, this was not done. The case had been investigated independently by the Commission Against Corruption which had endorsed the conclusions in the Ombudsman’s report.

The newer application was presented as an extension of his matrimonial home.