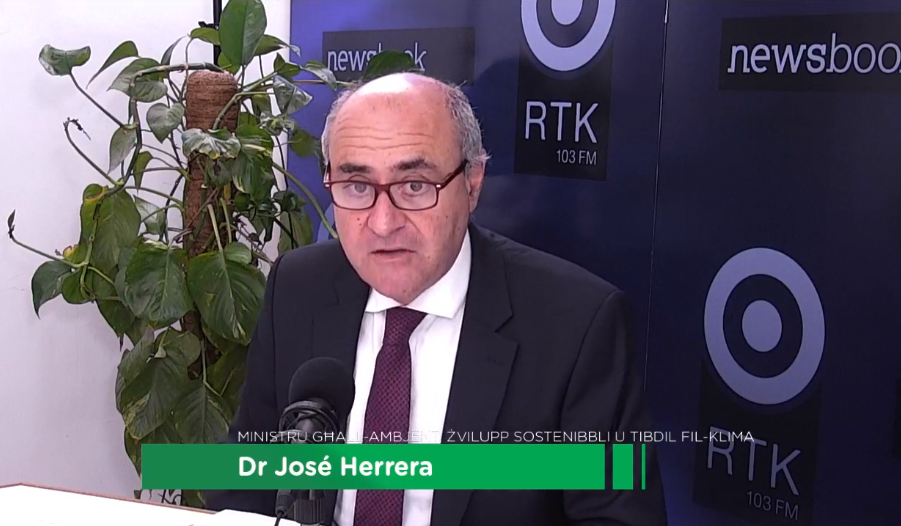 Minister for the Environment Jose Herrera told Newsbook.com.mt that he had just set up a committee made up of members of the Environment and resource Authority and University academics, among others, to find legislative means to empower ERA in imposing green aspects to approved developments. While on RTK’s FOLLOW UP, Minister Herrera was taking a long hard look at urban development. He noted the national penchant for paving up any green space and expressed the wish that more green spaces are made available. He noted that currently, in approving a development, ERA has a voice among many others but is not the determining voice in the decision making. “The aim of the committee I set up is to give ERA the ability to impose green aspects after the decision is taken even if these have not been included in the final drawings” said Minister Herrera.  This committee will be led by the Chairman of Ambjent Malta, Conrad Borg Manché and will bring to the table a bevy of entities such as Infrastructure Malta, the Planning Authority and representatives from the architectural profession. This initiative follows also a €1.1 million budgetary vote for urban greening, said minister Herrera.

A unification of remits

Minister Herrera also expressed the opinion that ideally, environment and planning would be under the same ministry. This, said Minister Herrera would be an indication of maturity.  He said that for far too long, we have taken our environmental capital for granted. He emphasised the need for balance and sustainability and care must be taken not look at the environmental components with what he defined as a ‘sentimental’ viewpoint. In reply to question made, he homed in to aspects such as the need for laws which would enable the consolidation of properties to enhance their economic value. He clarified that the main target in his mind at present was the consolidation of land to prevent it being parcelled out minutely on inheritance. Minister Herrera said that if the courts are required to attribute economic value to retaining a parcel of land whole, the pressure on subdivision will decline.

A fund for land acquisition

The minister also suggested the setting up of a fund for the acquisition of land which would otherwise be in peril of development. He explained that the fund would work on the same principle as the funds operated by the ministry for culture where the money is used to buy objets d’art. In this case, he explained, the ministry could intervene if, say, a garden which is also important to the area would be under threat, government could intervene.