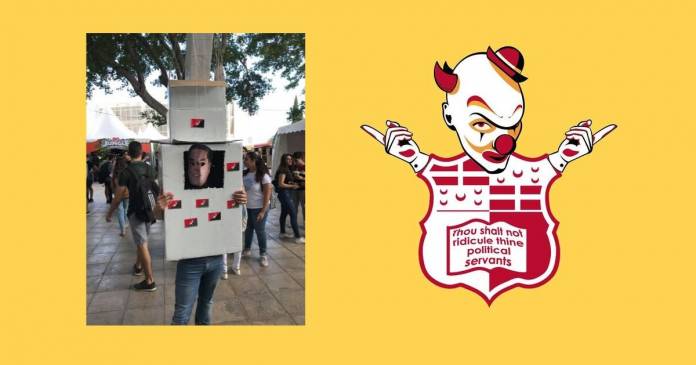 The University Students’ Council and the Head of Department of the Media and Communications Professor Ġorġ Mallia at the Faculty of Communications have expressed their concern over the censorship incident which occurred on University grounds on Monday.

KSU has condemned the behaviour by the University staff who confiscated a mask which was worn by a Moviment Graffitti activist during Freshers’ Week.

Professor Mallia said that he did not agree with the position adopted by the University of Malta, saying that the University should have explicitly stated that ‘freedom of expression is sacrosanct’.

Earlier the University of Malta Academic Staff Association (UMASA) condemned the incident, saying that as lecturers they have a moral responsibility to educate the leaders of tomorrow.

In his comment to Newsbook.com.mt, the Council’s PRO Thomas Mifsud condemned censorship adding that the Council understands Moviment Graffitti’s frustration over the incident. He added that KSU supports freedom of expression and freedom of speech.

Mifsud said that while the decision taken by the University staff could have been excessive, the intention was not aimed at hindering free speech.

The University of Malta stated that Freshers’ Week is not an appropriate platform to voice any sort of protest. UM explained that Freshers’ Week, an event on campus, “is meant to showcase student organisations, private and public enterprise and to introduce new students to university life.” It went on to state that the mask was confiscated after the activist was seen mingling with students visiting other stands, away from the MG stand itself.

The incident happened around 11am on Monday.

Partit Nazzjonalista leader Adrian Delia condemned the incident saying that it was unacceptable, undemocratic and shameful. He added that “when protesting against a government minister is forbidden, that is how and when democracy dies”.

Nationalist Head of Delegation and MEP Roberta Metsola remarked that what happened on Monday, is the opposite of what a university should be doing.

Gozo Tunnel: Works on drilling and construction are progressing – Borg

Amy Borg   January 24, 2020
Parliamentary Secretary Clayton Bartolo has ordered the termination of contract given to Adrian Hillman with the Malta Gaming Authority (MGA). Add who is AH and why he is bad news.