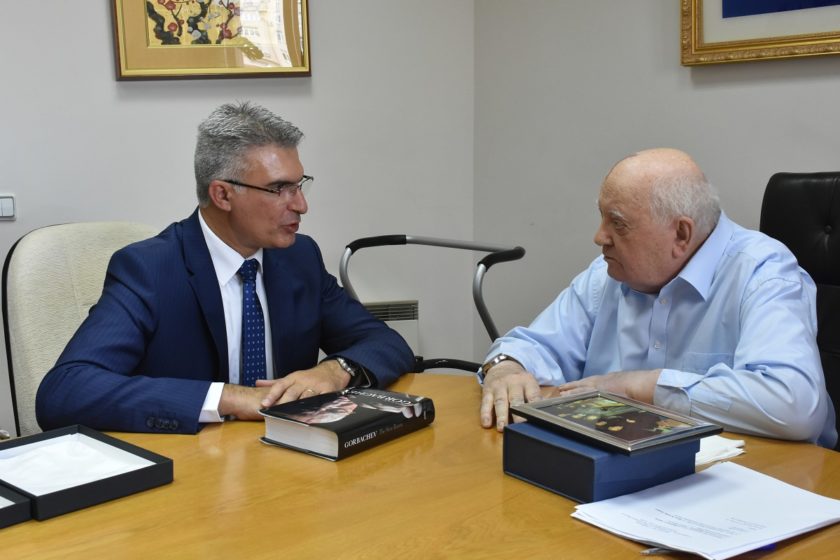 Malta’s Foreign Affairs Minister Carmelo Abela has met with the former leader of the Soviet Union Mikhail Gorbachev as part of the 30th anniversary commemorating the Malta summit between the USSR and the United States. Minister Abela met the 88-year-old Gorbachev during his visit to Moscow for bilateral talks with the Russian Foreign Minister Sergei Lavrov.

The meeting, which took place on a stormy December weekend in 1989, brought together the then US president George H. W. Bush and his counterpart, Mikhail Gorbachev, just a few short weeks after the fall of the Berlin Wall. This was the second meeting between the two officials following a previous one held in New York between Gorbachev and previous President Ronald Reagan. At the time, Gorbachev was the prime mover for the implementation of the policies of Glasnost (transparency) and Perestroika (reform of the Communist Party) in the then Soviet Union. Gorbachev was, in effect, bringing to closure the predictions of the political philosopher Andrei Amalrik, that the Soviet Union would not survive the millennium.

The Malta Summit’s greatest achievement was the formal ending of the Cold War. It allowed both sides to discuss the changes which were taking place across Europe and viewed by some as the official conclusion of the Cold War, with the thawing of tensions between both superpowers and Bush’s support of Gorbachev’s perestroika initiative and reforms in the liquidating Soviet bloc.

The Summit itself was held off the coast of Marsaxlokk on board the Russian cruise ship Maksim Gorky.

Gorbachev is reported to have said, ‘The world is leaving one epoch and entering another. We are at the beginning of a long road to a lasting, peaceful era. The threat of force, mistrust, psychological and ideological struggle should all be things of the past … I assured the President of the United States that I will never start a hot war against the USA.’

Bush replied, ‘We can realize lasting peace and transform the East-West relationship into one of enduring co-operation. That is the future that Chairman Gorbachev and I began right here in Malta.’

Gorbachev is President of the International Foundation for socio-economics and political studies, better known as the Gorbachev Foundation.

Coryse Borg   July 13, 2020
Tenor Joseph Calleja has announced that he will be headlining a concert, organised by NNG Promotions on the 5th September 2020.

John Paul Cordina   July 15, 2020
Malta and Italy alike are washing their hands off a group of 23 asylum seekers in distress who are presently close to Lampedusa, according to NGO Alarm Phone.