The press conference at St Elmo through which the government launched its financial package seeking to address the economic impact of the Covid-19 pandemic cost a total of €24,411.50, Prime Minister Robert Abela revealed.

In reply to a parliamentary question by PN MP Ryan Callus, Abela revealed that the biggest single expense was the stage and platforms, which cost €10,000.

In his reply, Abela sought to justify the expense by informing the MP that the activity “launched an economic regeneration plan worth €900 million,” which he later described as “the biggest economic injection made by a government in the history of our country.”

The lion’s share of the package comprises a pledged €400 million investment in Malta’s industrial infrastructure, though this will take place over the next 8 years. 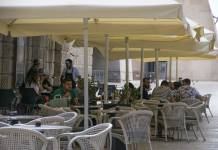 Abela did not specify whether the companies were selected following a competitive process or via a direct order.