“The Mediterranean region is currently threatened by outbreaks of instability and conflict” and “War is the failure of every plan, human and divine.” said Pope Francis in his address speech at ‘The Mediterranean border to peace’ conference held in Bari, Italy.

Pope Francis said on Sunday that it is unthinkable that we can address the problem by putting up walls and condemned the international community who has been content with military interventions.

In his speech, Pope Francis said that he finds it significant that the conference took place in Bari since this city is so important for its links with the Middle East and Africa. 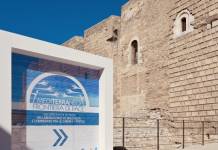 “The International Community should have built institutions that can guarantee equal opportunities and enable citizens to assume their responsibility for the common good instead”, said Pope Francis.

In his speech, the Pope said that unfortunately the Mediterranean region is threatened by conflict both in the Middle East and different countries of North Africa, as well as between various ethnic, religious or confessional groups.

“Nor can we overlook the still unresolved conflict between Israelis and Palestinians, with the danger of inequitable solutions and hence a prelude to new crises,” he said.

Pope Francis said that the ultimate goal of every human society is peace. “There is no reasonable alternative to peace because every attempt at exploitation or supremacy demeans both its author and its target.

His holiness posed a question to the bishops; What use is a society of constant technological progress, if it becomes increasingly indifferent to its members in need?

He explained that societies, including Church, are aware that, in different social contexts, there is a growing attitude of indifference and even rejection of those who caught up in their own wealth and freedom, are blind to others who, by speaking out or by the very fact of their poverty, are pleading for help.

He then explained how to be part of the Mediterranean region is a source of extraordinary potential and how young people, too, represent a special opportunity. Pope Francis said that when they are provided with the resources and possibilities young people do take charge of their own future, they show that they are capable of generating a promising and hope-filled future.

Pope Francis concluded his address by thanking the bishops to have come together to reflect on the vocation and future of the Mediterranean, on the transmission of the faith and the promotion of peace whilst also stating that the Mediterranean remains a strategic region whose equilibrium has an impact on the other parts of the world.