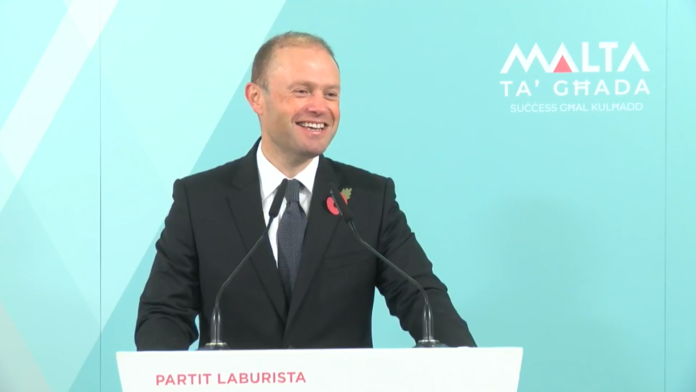 Focusing mainly on migration, Muscat referred to this week’s events and the 49 asylum seekers which were finally brought in after a deal was brokered on Wednesday. Muscat said that he faced pressure to leave the asylum seekers at sea while others pressured him to bringing them in without negotiating. Speaking after the people were brought in, Muscat said that in the deal brokered, “we tried to instill common sense” saying that no magical solution was found.

Speaking of Sea Watch and Sea Eye, Muscat said that he would not go into the details, however he said that Malta found itself between a rock and hard place during the situation, with mounting pressure on the country to take in the 49 people. Muscat said that the Armed Forces of Malta had already rescued some 250 people from drowning. He said that while these people were brought in to Malta without any questioning, he said that this was a European problem, referring to the deadlock on 49 asylum seekers. Muscat said that while Malta was called on to take responsibility, Malta was not responsible for this “problem” and would require a “European” solution. Referring to the Commission’s coordination work on the ad hoc agreement, he said that Malta was expected to take in the 49 migrants, however there was a country which closed its ports to the asylum seekers, in a clear reference to Italy, however the EU stepped in. He then asked the EU to step in and help in relocating the asylum seekers assisted by AFM, which was eventually accepted by the other Member States.

Muscat also referred to the keyboard warriors, saying that the extremes varied from those who escaped with no personal belongings that we should welcome contrary to those who apply for visa and those who tell you let them drown. Muscat said that he was sure that the person would be unaware of what they are saying, saying that such a person would go out and help a wounded cat.

Muscat described former Opposition and PN leader Simon Busuttil’s reaction to Judge Giovanni Grixti’s ruling, which saw the decision by Magistrate Ian Farrugia for an inquest to commence into the Panama Papers being overturned, Muscat described the situation as “surreal”. According to Muscat, the overturning of the decision “vindicated the lies” claiming he will not go into the merits of the case. He further claimed that Busuttil “lost” a case which was lesser in merit than the case concerning the number of seats in parliament awarded to PN during the previous administration.

Speaking about recent reports on possible land reclamation in Xgħajra, he said he got to know from the media after someone leaked the inconclusive report. Muscat then claimed that this was done with the aim to damage the government in mind. He then asked rhetorically why would someone think that we would hurt the south of Malta, referring to land reclamation. He then gave examples of land reclamation which already happened in Malta, such as Msida and Freeport, saying that land reclamation was not only building an island to fill it with skyscrapers.