In the meantime, informed sources told Newsbook.com.mt that boats holding as many as 400 migrants are approaching the Search and Rescue zone controlled by Malta. The information given by our sources tallies with a report by the International Organisation of Migration that over 500 migrants have departed from Libya this week, in their attempt to reach Europe. 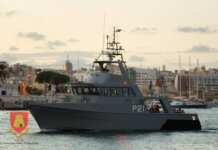 The website Relief Wed reported that Libya is considering its ports as unsafe for the disembarkation of migrants. It reported that up to 280 migrants, including women and children, who were returned to Libya on Friday have not been given permission to disembark. Officials are justifying their decision because of what they describe as intense shelling Tripoli’s main port.

Officials of the International Organisation of Migration who are on the spot providing food and water confirmed the heavy shelling. The COVID-19 curfew in Tripoli complicates the situation.

Also, the Italian government has declared its own ports unsafe due to the coronavirus epidemic. A new decree signed by the Ministers of the Interior, Transport, Health and Foreign Affairs says that due to the emergency, charity boats carrying migrants rescued in the Mediterranean, will not be permitted to dock.

The position of the Maltese Government

“Over the past months and years, Malta was under a disproportionate amount of pressure due to immigrant arrivals, and it received little to no tangible help. Nevertheless, thousands of lives were saved over the years,” said the Government.

The Maltese Government sent a letter to the European Commission outlining its position.

The news that more boats are approaching Malta’s SAR zone is expected to put that decision to the test.

The IOM Libya Chief of Mission Federico Soda said that “The status quo cannot possibly continue. A comprehensive approach to the situation in the central Mediterranean is needed.”

IOM is saying that European states must act now to end the return of migrants rescued at sea to Libya and ensure their safety.