The plight of the 49 human beings stranded off the shores of Malta seeking refuge as migrants has taken a turn for the better as an agreement has finally been reached. This was the main thrust of a press conference given by PM Joseph Muscat Wednesday morning at the Auberge de Castille. “220 persons will be relocated to other member states or be returned to their county of origin” Dr Muscat said. 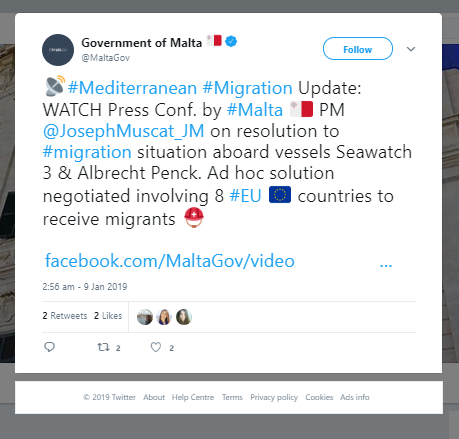 These migrants, still on boats and now seeking shelter from the current storm on and around the Maltese islands, will be taken in by Germany, France, Portugal, Ireland, Romania, Luxembourg, the Netherlands and Italy.  They will be taken in along with another group of circa 250 migrants who came to Malta over the Christmas period.

This is how the NGOs currently offshore are reacting:

The Prime Minister also explained that the majority of the 249 migrants rescued and disembarked in December will be distributed to other EU member states.

in the wake of the decision, Malta’s NGOs have issued a joint statement welcoming the Maltese government’s decision to allow the disembarkation of the 49 migrants currently at sea.

They state that they appreciate the, ‘solidarity expressed by other Member States and institutions of the European Union, in agreeing to share the responsibility of hosting the rescued migrants.’

They also stress that those coming to Malta should also be given access to their rights and procedures.

‘We underline the need to ensure that each and every one of the migrants is granted full access to asylum procedures so they will be able to get the protection that they need. We sincerely hope that this will not happen again, and that respect for life and human dignity will remain at the heart of Malta’s approach towards refugees and migrants.’

49 children, women & men are stranded at sea just outside Malta, some for more than 17 days. They are waiting for permission to enter a port of safety.

Footage from the Sea Watch 3:

#Malta Bishops express their appreciation to the @MaltaGov, the @EU_Commission and the 8 🇪🇺 countries, for the #solidarity finally shown with the 49 #migrants, most of which were stranded at sea for 18 days @BishopScicluna @seawatch_intl @JosephMuscat_JM https://t.co/NmP4rCAR5o pic.twitter.com/Qm8G8hEd3l