Dressed in white from her head down to her toes and accompanied by four dancers. That is how Michela took to the stage at Tel Aviv for her first rehearsal at the 64th edition of the Eurovision Song Contest.

This first rehearsal allowed her team and the Maltese delegation to analyse her performance and make any necessary changes. It also allows the stylists, make-up artists and hairdressers to consider their aesthetic from a better perspective.

Michela received a plethora of praise as the video of her rehearsal was circulated with the general running comment being that it was an energetic performance bursting with colour.

We leave it to you now to watch the video below and comment on her rehearsal in Tel Aviv earlier today.

Michela will be taking part in the second semi-final of the 64th edition of contest. 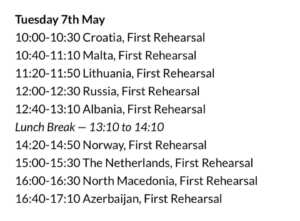 She was the second singer on the roster that took  to the stage. The rehearsals today started with the Croatian act.

There will be no rehearsals on Wednesday, whilst on Thursday we will see the first semi-final contestants’ second rehearsal.

Michela will be representing Malta with the song Chameleon composed by Joacim Persson, Paula Winger, Borislav Milanov and Johan Alkanas.