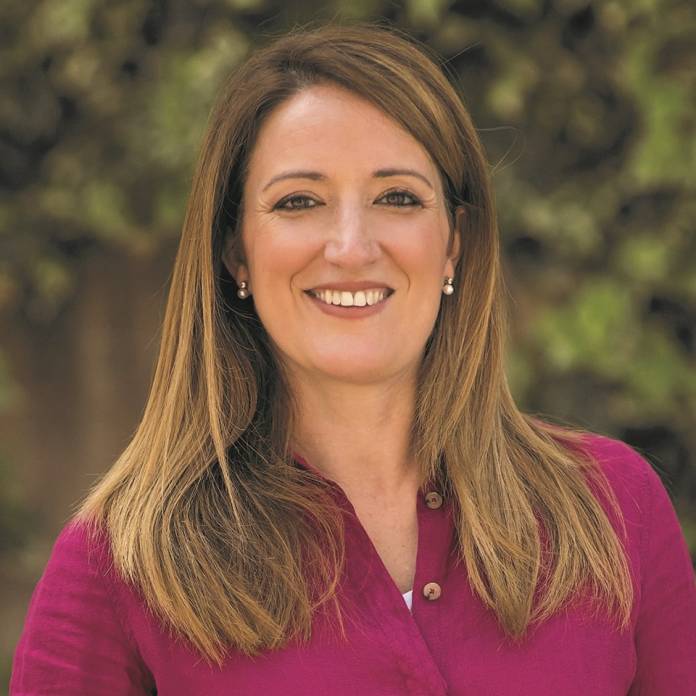 EPP MEP Roberta Metsola has set out her vision for a political structure for the future. In a seminal article published in The Times, Metsola took stock of the present situation within the Partit Nazzjonalista where she militates and made a bare bones assessment of what the party and the country require to move forward from the current quagmire.

“The political model that the PN developed after 1971  led our country to democracy, wealth and equality, but if we are to pull Malta and Gozo up to the levels my generation was promised, we now need to forge something even stronger, something in tune with our times”, wrote Metsola. She said that the ‘murky mediocrity of this Government’ is not an acceptable standard and Malta needs to be defined by excellence.

Focusing on sustainability, Metsola said that the ambition of private sector investment must be matched by commitment from Government across the board, “where your hands are not tied by red tape or the bribes you think you are expected to pay. Where ideas matter more than connections. Where prosperity is about hard work not political patronage. Where playing by the rules is more profitable than breaking them and where enforcement and equality means a level playing field for all businesses – including for all those SMEs and family businesses”.

Metsola said that the fiscal models employed so successfully for foreign companies are extended to more sectors of the economy that need an incentive to get past Malta’s economies of scale. “Where our economy is designed for the long term benefit of our population, not the immediacy of boom and bust cycles. Where we invest in our people, our companies, our police, our teachers, our doctors, our nurses, to fulfil the promise of this country” wrote the MEP.

Significantly, the PN MEP homed in on the issue of democracy: “Where the Press and the role of journalists are respected and honoured. Where Government understands that the future of our economy is intertwined with that of our democracy including the media. Where critical thinking is taught from day one in our schools and where it matters more than political connections in the job market. Where girls and boys are both equally able to realise their potential. Where the role of Government is smaller, less intrusive, and where you are free to operate under a clear set of rules applicable equally to everyone. Where no-one is expendable. Where tele-working becomes the norm not the exception, increasing productivity, boosting growth and reducing the impossible traffic congestion clogging our roads and lungs.”

Together for the environment

Turning her gaze to the environment, Metsola wrote that “We deserve to have the best planning laws we can have, where restoration becomes an industry onto itself. Where the construction and restoration industries work hand in hand for the same aim. Together. Where ODZ means ODZ. Where for every one metre of concrete, you plant two meters of trees. Where design and aesthetics matter more, where our town centres are preserved and our village squares given back to residents. Where our authorities treat everyone in the same way. Where every town has a garden to act as green lungs for the people there.”

On rule of law

Rule of law was also another topic in this comprehensive vision. With the firmness of conviction, Metsola wrote that justice needs to be served and to be seen to be served. She said that MAlta needs to be a place “Where law and order are given the resources and the respect they deserve and where they are paid more than the criminals they have to arrest. Where faith is restored in our core institutions. Law enforcement cannot be taken seriously if it refuses to prosecute politicians. It is time to create systems where authorities are made as incorruptible as possible, with checks, balances and security of tenure meaning their decisions and loyalty is only to the common good.”

We change or we die

But to do that, wrote Metsola,  the PN first needs to be in a position to win an election. “That means we need to get our house in order. We need to heal. We need to end the infighting, stop the social media sniping, manage our debt, reform the way we do politics, help new candidates grow, create space for everyone and be honest about our failures. We need to draw a line and press the reset button. We need to run on future plans not on nostalgia. It is not only the question of “who” we need to answer but the “why”. We must become about sound policy not soundbites.”