The Office of the MEP Alex Agius Saliba issued a statement saying that the Socialist and Democrat’s (S&D) political group for the Petitions Committee shall start being coordinated by Alex Agius Saliba himself. He is in fact the youngest S&D MEP elected as Coordinator during this legislature.

What is the role of the Petitions Committee?

It is the go-between EU citizens and the EU institutions, addressing citizen’s problems on the one hand and on the other, ensuring that the rights and opportunities enabled by EU legislation is directly benefitting all European citizens. In Agius Saliba’s words “This Committee provides a unique opportunity for MEPs to engage directly with citizens in a meaningful dialogue in situations when the EU has failed them.”

What will Agius Saliba be doing?

MEP Agius Saliba claimed that through his role as a coordinator he will continue safeguarding citizen’s interests and making sure that they are adequately addressed by the Petitions Committee. Shortly after the election, MEP Agius Saliba commented: “Listening to people’s concerns and frustrations, who had turned to this Committee for help, have shown me that with our work, we can make a difference in people’s everyday lives.” 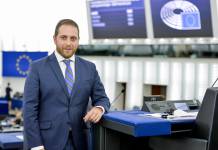 As a coordinator, Agius Saliba will act as a mediator and spokesperson for its political group in all the workings and other aspects of the running of the Committee. Moreover, he will be leading the coordination of activities of the S&D members and positions on a number of files and legislations that fall within the competence of the Committee.

In the statement, Agius Saliba states that he is honoured that his S&D group colleagues in the European Parliament have entrusted him with a position with so many responsibilities .

Finally, he promises to “be at the forefront of the battle for demanding a commitment from all institutions on listening to citizens’ needs and addressing the existing political and institutional shortcomings of the EU”.

Watch: Gozo discussed at European Week of Regions and Cities

Reuters   February 18, 2020
Fatima Cecilia Aldrighett went missing on Feb. 11. Her body was discovered over the weekend in a plastic garbage bag in Mexico City's Tlahuac neighbourhood, days after another murder of a young woman triggered angry protests.

Maria Webb   February 15, 2020
Francis Zammit Dimech, interim Secretary General for the Nationalist Party (PN), explicated that the term 'interim' in relation to his role is due to the upcoming structural reform within the party.

Pharmacies open on the 16th February 2020